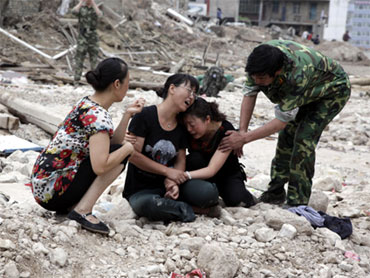 The death toll from landslides in northwestern China more than doubled to 702 Tuesday, as rescue crews in three Asian countries struggled to reach survivors from flooding that has imperiled millions.

Rescuers digging by hand through mud found a 52-year-old man who had been trapped for more than 50 hours inside a leveled apartment building in the remote town of Zhouqu, where more than 1,000 other people were still listed as missing. Rescuers with sniffer dogs discovered the man, Liu Ma Shindan, who was weak but breathing normally.

Pakistan's President Asif Ali Zardari returned home to a storm of criticism after visiting Europe as his country was gripped by the worst floods in its history. His arrival Tuesday came as thousands of people fled a major city in central Pakistan as rivers threatened to submerge the area.

And rescuers in the desert mountainsides in Indian-controlled Kashmir recovered more bodies, with the death toll rising to 165 from flash floods. Thousands of army and paramilitary soldiers continued clearing roads and removing the debris of hundreds of homes flattened in the Ladakh region.

About 200 remained missing around Ladakh, said Lt. Col. J. S. Brar, an army spokesman. With the road links being restored, nearly 300 people who fled to higher ground have returned to their homes, he said.

The disaster in China's Gansu province was caused when a debris-blocked swollen river burst, swamping entire mountain villages in the county seat of Zhouqu.

Tian Baozhong, the director of civil affairs in Gansu province, said the death toll now stood at 702, up from 337 on Monday.

Another survivor, Yang Zhukai, began the sad task of making simple coffins for the 10 to 20 relatives killed by the mudslide.

"These are all for relatives, for relatives killed by the mudslide. It was so unexpected - a huge landslide like this. There's nothing left. We managed to escape with our lives. As far as relatives, 10 to 20 died from my village," he told Associated Press Television News.

Throughout the area, bodies were seen wrapped in blankets and tied to sticks or placed on planks and left on the shattered streets for pickup.

"It is now a critical time for disaster relief and rescue work. We must give the highest prominence to the protection of people's lives and properties," the committee said in a statement.

The government said 1,042 were missing and about 45,000 were evacuated. It was not known how many of the missing were in danger or simply out of contact as workers rushed to restore communications.

More rain is expected in the region in coming days, the China Meteorological Administration said. Tents, blankets, food and water were all being rushed to the isolated area, creating traffic jams on the few roads in.

Flooding in China has killed about 1,800 people this year and caused tens of billions of dollars in damage across 28 provinces and regions.

In Pakistan, two weeks of flooding have killed 1,500. Amid the relentless rains, President Zardari - an unpopular figure to begin with - took off for a visit to France and Britain. His aides said he had to make the trip for diplomatic reasons, especially to Britain, whose Prime Minister David Cameron had recently accused Pakistan of exporting terrorism.

But the timing of trip struck a raw nerve among many who said Zardari should have stayed with his suffering people. The widespread crisis has overwhelmed Pakistan's government and frustrated citizens who have complained about slow or nonexistent aid efforts.

The Pakistani Taliban, which is allied to al Qaeda and is fighting for the overthrow of the Pakistani state, urged the government not to accept any Western aid for flood relief. Western countries have given millions of dollars, and the U.S. effort has included helicopter relief flights in the stricken region.

Pakistan estimates that 13.8 million of its people are affected by the floods and will need short-term aid or long-term assistance to recover.

"The magnitude of the tragedy is so immense that it is hard to assess," said Pakistani Prime Minister Yousuf Raza Gilani during a visit to the central Pakistani city of Multan.

On Tuesday, people streamed out of Muzaffargarh, a major city of about 250,000 people in Punjab province, after authorities issued warnings using loudspeakers on mosques the previous evening. "There is chaos," said Mohammed Amir, a police official in the city.