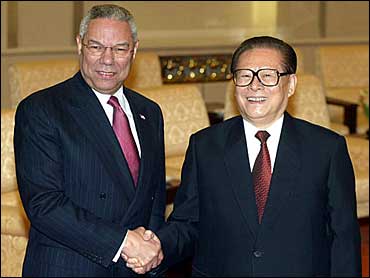 After meeting with Chinese Vice President Hu Jintao and Foreign Minister Tang Jiaxuan, Powell told a news conference that China was undertaking initiatives with North Korea that he was unable to discuss publicly.

Powell said China "is anxious to play as helpful a role as they can." Both the United States and China, Powell said, would view with "great seriousness" any attempt by North Korea to take steps to utilize the plutonium at its nuclear facility at Yongbyon to develop nuclear weapons.

The administration believes North Korea could have six such weapons in a matter of months.

China is the chief provider of foreign assistance to North Korea. Privately, administration officials have said China has not used all the leverage it has to induce North Korea to curb its nuclear ambitions.

After Powell's news conference, he met with President Jiang Zemin.

Later, Powell flew to South Korea, where he will attend the inauguration Tuesday of President-elect Roh Moo-hyun. He will return to Washington Tuesday night.

During a morning photo session with Powell, Tang said, "There is no doubt that this current visit will enhance mutual understanding and cooperation between our two countries."

The Bush administration welcomed that step as affirmation of global uneasiness over the issue. Officials believe the IAEA move undercuts North Korea's insistence that the North and the United States should address the issue one-on-one.

Powell rejects that approach on grounds that a U.S.-North Korea agreement in 1994, which held out the promise of a nuclear-free North, has collapsed because of violations.

The Security Council could impose sanctions against North Korea.

The North previously has vowed to treat renewed sanctions as acts of war.

The United States has not said it will seek sanctions now, but published reports indicate it is devising bans on North Korean weapons sales and the flow of cash from expatriate firms back to the North. Those measures could be implemented if the crisis escalates.

Washington and its allies suspended fuel shipments, and the North retaliated by expelling U.N. monitors, restarting frozen nuclear facilities and withdrawing from the Nuclear Nonproliferation Treaty.

North Korea claims its nuclear development is justified because of U.S. moves it considers threatening: suspending talks for the first few months of the Bush administration; including North Korea in an "axis of evil" with Iran and Iraq, the target of looming war; advocating a doctrine of preemptive strikes; listing North Korea as a country where the use of nuclear weapons may have to be considered; and announcing plans to deploy a missile defense aimed mainly at blocking North Korean missiles.

For those reasons, the North says, it wants the United States to sign a non-aggression pact.

The United States has said before that it wants to settle the nuclear dispute diplomatically and has assured the North that it has no plans for an attack.

But President Bush has also refused to rule out the military option, prompting repeated accusations from North Korea that Washington is intending to invade.

Powell said the United States has seen "some setbacks" in China concerning protection of human rights.

Since December, he said the United States has been "deeply concerned by the execution of a prominent Tibetan, the detention of more than a dozen pro-democracy activists and the continuation of a pattern of inconsistent and irregular legal and judicial procedures."

Powell also made his case for Chinese support for a second U.N. Security Council resolution on Iraq that would authorize military action against that country if President Saddam Hussein refuses to disarm.

China's stand on the issue is crucial because of its veto power as a permanent member of the Council. Powell said he did not press the Chinese leaders on their plans because the second resolution has yet to be tabled. Until now, China has supported a continuation of U.N. inspections in Iraq.

Powell expressed hope that Iraq will comply with the U.N.'s demands. "If Iraq does not comply and the U.N. refuses to act, it will be a bad day for the U.N.," Powell said.

The United States and Britain were planning to introduce a second resolution on Monday.