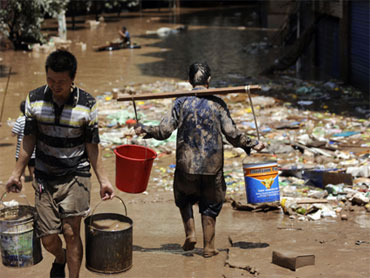 Flooding this year has killed 701 people, left 347 missing and caused tens of billions of dollars in damage, the worst toll across the board that China has seen in a decade, a senior Chinese official said Wednesday.

Three-quarters of China's provinces have been hit by flooding and 25 rivers have seen record-high water levels, Liu Ning, general secretary of the government's flood prevention agency, told a news conference.

With the flood season far from over, this year is shaping up to be one of the most devastating since 1998, which was the worst in 50 years.

Flooding, particularly along the Yangtze River Basin, has overwhelmed reservoirs, swamped towns and cities, and broken off hillsides causing landslides that have smothered communities.

Soldiers used bulldozers to plow through debris Tuesday in search of survivors from separate landslides in Sichuan and Shaanxi provinces, while workers in other parts of the country scrambled to drain overflowing reservoirs and pile up sandbags to prevent further flooding, the official Xinhua News Agency reported.

Three people were killed late Sunday night by landslides in Lingao county in Shaanxi province that also left 17 missing, Xinhua reported. In all, flooding and landslides from rain-soaked hillsides in Shaanxi have killed 37 and left another 97 missing.

Xinhua and state broadcaster China Central Television reported the Three Gorges Dam was dealing with its highest water levels ever when a flood crest passed the dam Tuesday morning.

The government cited flood control along the Yangtze as one of the main reasons for the $23 billion dam project that forced the relocation of 1.4 million people.