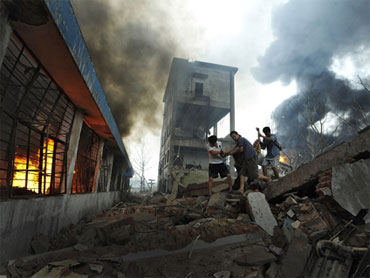 A powerful blast caused by a suspected gas leak rocked a plastics factory in eastern China on Wednesday, killing at least five people and seriously injuring 28.

The explosion happened about 10 a.m. in downtown Nanjing, the capital of' Jiangsu province in eastern China,

"Preliminarily findings confirmed five people were killed on the spot and 28 were seriously injured," said a statement released by the Nanjing government.

Rescue work was under way and the cause of the blast at the Nanjing No. 4 Plastics Factory was under investigation, it said.

An initial investigation showed the explosion was caused by a gas leak from a pipe in the plant, the official Xinhua News Agency said.

The death toll could rise. Xinhua said a man living nearby died after a ceiling in a home collapsed, and rescuers were searching for people in the debris.

Xinhua reported buildings and vehicles within 100 yards (meters) of the blast were badly damaged. Passengers on a passing bus were also injured. Xinhua quoted local residents as saying they thought there was an earthquake when the explosion happened.

Xinhua said local hospitals had almost run out of blood for transfusions.

Accidents are common in China's safety-lax factories, with fires, explosions and other problems killing thousands of people each year.