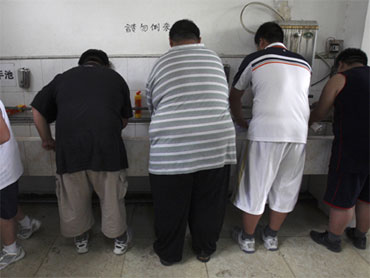 After working overtime to catch up to life in the West, China now faces a whole new problem: the world's biggest diabetes epidemic.

One in 10 Chinese adults already have the disease and another 16 percent are on the verge of developing it, according to a new study. The finding nearly equals the U.S. rate of 11 percent and surpasses other Western nations, including Germany and Canada.

The survey results, published Thursday in the New England Journal of Medicine, found much higher rates of diabetes than previous studies, largely because of more rigorous testing measures. With 92 million diabetics, China is now home to the most cases worldwide, overtaking India.

"The change is happening very rapidly both in terms of their economy and in terms of their health effects," said David Whiting, an epidemiologist at the International Diabetes Federation, who was not involved in the study.

"The rate of increase is much faster than we've seen in Europe and in the U.S."

Chronic ailments, such as high blood pressure and heart disease, have been steadily climbing in rapidly developing countries like China, where many people are moving out of farms and into cities where they have more sedentary lifestyles.

Greater wealth has led to sweeping diet changes, including eating heavily salted foods, fatty meats and sugary snacks - boosting obesity rates, a major risk factor for Type 2 diabetes, which accounts for 90 percent to 95 percent of all diabetes cases among adults.

"As people eat more high-calorie and processed foods combined with less exercise, we see an increase of diabetes patients," said Huang Jun, a cardiovascular professor at the Jiangsu People's Hospital in Nanjing, capital of northern China's Jiangsu province, who did not participate in the study.

"Whereas 20 years ago, people took naps during the work week, people are now faced with the stress of making more money to support a family and a buy a house."

Earlier nationwide studies relied only on one blood sugar tolerance test, while this survey of nearly 50,000 people caught many more cases by checking levels again two hours later, an approach recommended by the World Health Organization. More than half of the people with diabetes didn't know they had it, the study found.

The study did have some limitations, sampling more women and city residents - 152 urban districts compared to 112 rural villages. Yang said she was alarmed by the findings, and China's Ministry of Health has been alerted. She said there are plans to promote a national prevention strategy.

Diabetes occurs when the body is unable to regulate blood sugar. It is a major risk factor for heart disease, which remains the biggest killer in the world's most populous nation.

"I don't think it's unique to China, but it's certainly a concern that the rates are high," said Colin Bell, a chronic disease expert at WHO's regional office in Manila. "It emphasizes the need for strong prevention and treatment programs."

The Asia-Pacific, the world's most populous region, was highlighted in another study last year estimating that by 2025, it would be home to more than 60 percent of the 380 million diabetes cases globally.

And while the world's giants China and India already have the highest number of cases worldwide, the per capita rate is higher in several other countries - up to 30 percent of all people living on the tiny Pacific Island of Nauru have the disease, according to estimates from the International Diabetes Federation.

The Chinese study sampled people from June 2007 to May 2008 across 14 cities and provinces. It revealed men were slightly more affected and there were more diabetes cases in cities than in the countryside - one in 11 city dwellers were diabetics, compared with one in eight in rural areas.

However, the number of people on the verge of developing diabetes was higher in rural areas.

The WHO estimates that diabetes, heart disease and stroke will cost China $558 billion between 2006-2015.