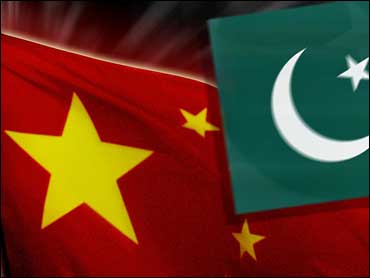 China has taken a significant step in meeting Pakistan's military needs with the completion of a militarily important naval frigate as part of an $800 million deal, which analysts say will further deepen Islamabad's reliance on Beijing as a key supplier of military hardware.

Senior western diplomats based in Islamabad said China's interest in expanding its military ties with Pakistan is linked to its overall ambition of emerging as a formidable military and defense power in the Asia-Pacific region, with the capability of eventually reaching out to influencing the oil rich Middle East.

China has supplied arms to Pakistan for more than 40 years. But this relationship which originally began as a largely military hardware supply tie-up has developed into a strategic partnership.

"In future, China probably looks at Pakistan as a country that could help it build bridges with the Islamic countries of the Middle East" said a western ambassador in Islamabad who spoke to CBS News on condition of anonymity.

News of the completion of the first of four Chinese frigates designed to be sold to Pakistan comes as the Bush administration weighs its future relations with the newly-elected government of prime minister Yusuf Raza Gilani.

Washington's main worry is prompted from public statements by newly-elected politicians who want to review the way Pakistan would execute its anti-terrorist operations against militants loyal to al Qaeda and the Taliban who operate mainly in a remote region along the Afghan border.

In the past six years, Washington has given direct or indirect assistance worth about $10 billion to the Pakistani government. But Western defense officials say Pakistan continues to maintain a close military relationship with China which is considered a more reliable ally.

In the 1990s, the U.S. slapped sanctions on Islamabad, first in retaliation over reports that Pakistan was preparing to manufacture a nuclear weapon and then after Pakistan's maiden nuclear tests in 1998. A U.S. agreement with Pakistan to supply the country with a batch of F-16 fighter planes remained suspended in the 1990s, as the most widely visible symbol of the breakdown in the military relationship. U.S. arms sales were resumed only when Pakistan turned its back on Afghanistan's Taliban regime after the New York terrorist attacks, and joined the U.S.-led war on terror.

On Saturday, the China Daily newspaper reported that the formal ceremony to launch the first of four F-22P frigates built by China for Pakistan will take place on Monday in Shanghai, where Admiral Muhammad Afzal Tahir, chief of the Pakistan navy, will also be present. "They (frigates) will be deployed for the defense of our maritime interests and to meet our commitments in other aspects of maritime diplomacy," wrote China Daily quoting Admiral Tahir.

Another three frigates will be built and delivered in the next five years including one which will be built entirely in Karachi-Pakistan's coastal southern city. Naval analysts say, this deal involves the eventual transfer of Chinese technology that will help Pakistan eventually improve its naval shipbuilding capability in a way that the country has not been helped by any of its other allies (including the U.S.).

Responding to this news, some warned that ordinary Pakistanis are still skeptical of the relationship with the U.S. in view of that experience. "Across Pakistan, the popular view is that the U.S. is untrustworthy as an ally. China has always stood by Pakistan's side, so ordinary people trust China as the most reliable friend of Pakistan" said one Western defense official in Islamabad who spoke to CBS News on condition of anonymity.

Coming off the experience of the suspended F-16 deal in the 1990s, Pakistan began working on a plan with China in 1996 to jointly produce a new fighter plane which it hopes will become the backbone of its air force. Known as the JF-17 "Thunder," Pakistani defense officials claim that the aircraft is comparable to the earlier version of the F-16s produced in the late 1980s and early '90s.

In the past three years, Pakistan has reached an agreement with the U.S. to purchase 18 new F-16 fighter planes and up to 70 used F-16s in a deal estimated to be worth more than $3 billion. But the country has also reached an agreement with China to jointly produce up to 250 of the JF-17 fighter planes in a deal estimated by defense officials to be worth at least $5 billion.

Additionally, Pakistan is currently negotiating the purchase of between 35 to 40 of the J-10 fighter planes which is one of the most advanced fighter planes produced by China. The deal could eventually be worth $1.5 billion, according to estimates by two western defense officials who spoke to CBS News.
By Farhan Bokhari