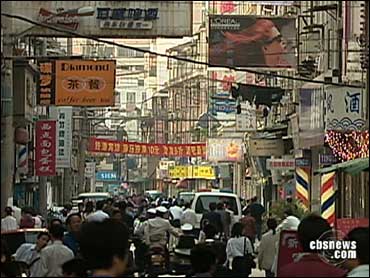 China is roaring. It holds a trillion dollars of U.S. government IOUs - more than any other country.

"Unfortunately, average Americans are going to see a decline in their standard of living," said Peter Schiff, the president of Euro Pacific Capital. "We have simply squandered our wealth. We've been living beyond our means for years and borrowing to do it and now we can't pay the bills."

A sign of China's rise: Its prime minister recently lectured the United States like a first world country nervous about the health of a third world economy.

"Request the U.S. to maintain its good credit and guarantee the safety of China's assets," Wen Jiabao said.

China has even pushed for dumping the dollar as a world currency and replacing it with something new and, they suggest, more trustworthy.

"They're thinking about a 40- or 50-year time span," said China expert Arthur Kroeber. "It's quite clear at the end of that time that China will certainly be one of the major economies in the world, with the U.S. being the other one."

What Americans aren't buying - made-for-export items from speakers to socks to sewing machines - are being snapped up here. And if at least China's economy is humming, that's good for the United States.

"This is one of the few remaining hopes that we can prevent the global recession from plunging into a great depression," said Victor Gao, a China economic specialist.

But China has problems that could stunt its growth. With per capita income of only $3,000 dollars a year, its own people aren't rich enough to buy all the products it once sold to the world - so many factories are shuttered. An estimated 30 million are unemployed out of nearly 900 million workers. Six million more of this year's college graduates crowd job fairs fearful they may join the jobless.

Still, with America's economic troubles, China sees the opportunity of becoming more important on the world stage. And that's why it is radiating confidence, and acting more and more like the superpower it fully intends to be.