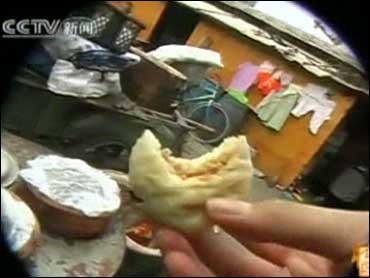 Chopped cardboard, softened in an industrial chemical and made tasty with pork flavoring, is a main ingredient in batches of steamed buns sold in a Beijing neighborhood, state television said.

China Central Television's undercover investigation report features the shirtless, shorts-clad maker of the buns — called baozi — talking about how the product was sold in a neighborhood in Beijing's sprawling Chaoyang district.

The hidden camera follows the man, whose face is not shown, into a ramshackle building where steamers are filled with the fluffy white buns, traditionally stuffed with minced pork.

The surroundings are filthy, with water puddles and piles of old furniture and cardboard on the ground.

"What's in the recipe?" the reporter asks. "Six to four," the man says.

"You mean 60 percent cardboard? What is the other 40 percent?" asks the reporter. "Fatty meat," the man replies.

The bun maker and his assistants then give a demonstration on how the product is made.

Squares of cardboard picked from the ground are first soaked to a pulp in a plastic basin of caustic soda — a chemical base commonly used in manufacturing paper and soap — then chopped into tiny morsels with a cleaver. Fatty pork and powdered seasoning are stirred in.

Soon, steaming servings of the buns appear on-screen. The reporter takes a bite.

"This baozi filling is kind of tough. Not much taste," he says. "Can other people taste the difference?"

"Most people can't. It fools the average person," the maker says. "I don't eat them myself."

The police eventually show up and shut down the operation.