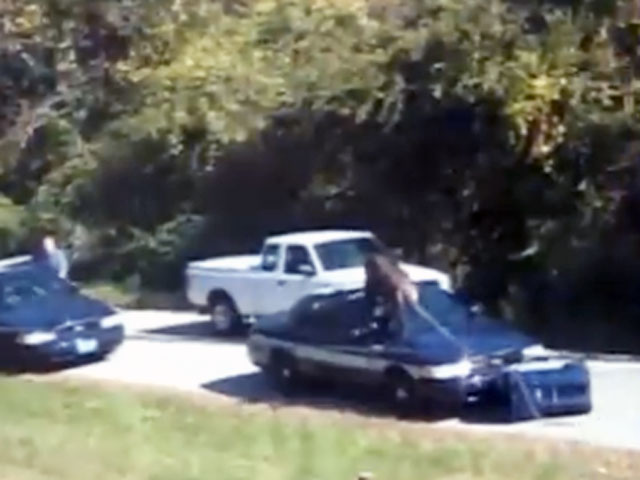 KANSAS CITY, Mo. (CBS/AP/KCTV) A 300-pound chimpanzee that broke out of its owner's house has been captured after smashing out the window of a police car and wandering around a neighborhood in Kansas City, Mo.

"Terrifies me for my daughter, she was on the roof screaming bloody murder," said Shannon Jennings, a Kansas City resident according to CBS affiliate KCTV.

Jennings said she was rushing to help her niece, when the chimp jumped on the hood of her SUV.

"I was scared, terrified," Jennings said. "I didn't know he could open doors, but I knew it was on top of my car and the car was shaking."

Police Capt. Rich Lockhart tells The Kansas City Star that his department got a call about noon Tuesday that a primate was on the loose a few miles from the Kansas City Zoo.

Even though it was near the zoo, Lockhart says the chimp was actually a pet that had escaped from its chains. Animal control officers shot the chimp - named Sueko - with a tranquilizer, but said it did not work to subdue the animal. The chimp then climbed a tree and avoided another tranquilizer shot by Animal Control officers.

Police said Sueko was capable of opening doors and that it had climbed on a patrol car and struck the passenger-side window with its fist before running off.

Its owner was eventually able to coax it into a cage.

Lockhart says the owner has been cited for having a dangerous animal within city limits.

"They asked me if I could house it, 'cause they don't have things like that," said Savorelli.

Savorelli took Sue in temporarily, but said he will keep her as long as needed at the facility located in Greenwood, Mo., southeast of Kansas City.