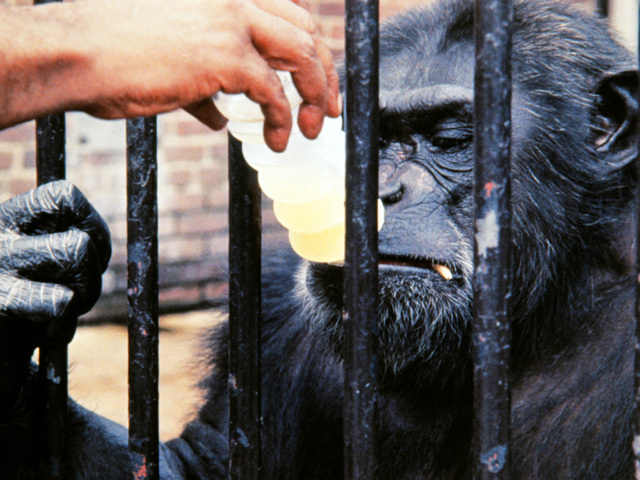 (CBS/AP) Chimpanzee research may be on its way out, now that the government's National Institutes of Health said it plans to impose strict limits that would make chimp studies a last resort.

The government's announcement was prompted by an Institute of Medicine declaration that most chimp studies can't be justified, and that strict new limits should determine which experiments are important enough to outweigh the moral cost of involving a species that's so similar to humans.

The group stopped short of recommending an outright ban, saying a handful of projects today might require chimps - but animals may also be required in the future as new diseases evolve and emerge.

Animal welfare groups welcomed the announcement - but would prefer a total ban.

"Chimpanzees have provided limited value in research settings, and now alternative methods have been developed that will make their use all but obsolete," said Wayne Pacelle, president of the Humane Society of the United States.

Some scientists say chimp research has already been on its way out, so the limits won't change much.

"The use of a chimpanzee in biomedical research is the rare exception," said Dr. Thomas Rowell, director of Louisiana's New Iberia Research Center, one of five research centers that house chimps and other primates.

It's unclear what will happen to many of the nation's 937 research chimps - 612 government-owned - that are currently being used in research. Most of the chimps are old, since the U.S. put a moratorium on breeding since 1995.

Collins also announced the NIH temporarily barred new government-funded studies involving chimps as his agency began implementing the new limits. The NIH will also decide whether to phase out about 37 ongoing projects, half of which Collins said probably don't meet the new standards.

Chimpanzee's genetic similarity to humans - about 99 percent identical - has long caused a quandary, making the animals valuable to medical researchers for nearly a century but also sparking ethical debates.

"They are highly intelligent. They live in complex social settings, and they live for a very long time," said evolutionary anthropologist Dr. Anne Pusey of Duke University, who once worked with chimp expert Jane Goodall and manages an archive of Goodall's field data on the animals.

"When you enclose a chimp in a very small cage for 50 years, it really is cruel and unusual, even regardless of whether you're doing invasive things to them," she added.

The government's move puts the U.S. in line with the rest of the world. The U.S. is one of only two countries that conduct chimp research; the other is Gabon, in Africa. The European Union essentially banned such research last year.