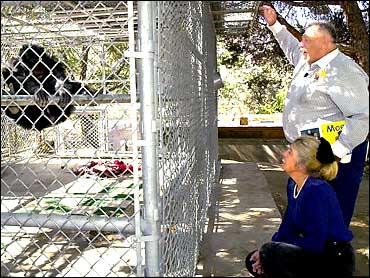 Investigators said they are trying to figure out how two chimpanzees that viciously attacked a visitor at an animal sanctuary escaped from their cage.

The chimps chewed off St. James Davis' nose and severely mauled his genitals and limbs Thursday before the son-in-law of the sanctuary's owner shot the animals to death, authorities said.

Davis, 62, and his wife had gone to there to visit another chimpanzee that had lived with them for decades before they were forced to give the animal up. LaDonna Davis, 64, was bit on the hand.

"A big part of the investigation will be figuring out whether the (sanctuary) owners were in compliance with regulations," sheriff's Cmdr. Hal Chealander said. "There's a reason why those chimpanzees got out. It will be crucial to our investigation how they got out."

Health authorities were testing the dead chimps for rabies and other diseases.

The Davises were at Animal Haven Ranch, in a canyon 30 miles east of Bakersfield, to celebrate the birthday of Moe, a 39-year-old chimpanzee who was taken from their suburban Los Angeles home in 1999 after biting off part of a woman's finger.

The couple had brought Moe a cake and were standing outside his cage when Buddy and Ollie, two of the four chimpanzees in the adjoining cage, attacked St. James Davis, said Steve Martarano, a spokesman for the state Department of Fish and Game. Moe was not involved in the attack.

Dr. Maureen Martin of Kern Medical Center told KGET-TV of Bakersfield that the monkeys chewed most of Davis' face off and that he would require extensive surgery in an attempt to reattach his nose. Chealander told The Bakersfield Californian that the chimps also tore off Davis' testicles and foot.

Davis was taken to Loma Linda University Medical Center, where he underwent surgery. The hospital would not release any information on his condition.

Primate experts said that chimpanzees, which typically weigh between 120 and 150 pounds and are much stronger than humans, are known to kill chimps from neighboring groups, hunt other primates and even attack humans in the wild.

"This episode highlights some of the dangers of privately owning primates," said Steve Schapiro, who studies chimpanzee behavior at the University of Texas. "When you maintain large, strong animals in captivity, you think you know what they're going to do, but in the end they're unpredictable."

Animal Haven Ranch has held state permits to shelter animals since 1985 and serves as a sanctuary for animals that have been confiscated or lost, Martarano said.

The sanctuary's owners, Virginia and Ralph Brauer, would not speak to reporters, but a family friend provided a statement that read, "All of us here at Animal Haven Ranch are praying for the recovery of St. James Davis and LaDonna Davis."

"This is the only incident in 20 years of operation," the statement said.

The Davises had waged an unsuccessful legal fight to bring Moe back to their West Covina home and visited him regularly at the sanctuary, where he had been living since October.

In 2000, after city prosecutors decided to drop charges against the Davises in Moe's 1999 attack, St. James Davis said Moe was not a threat to the public and attacked only when provoked.