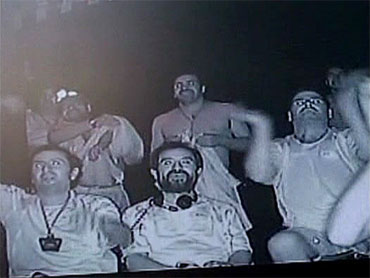 Rescuers have sent down antibiotics and ointments and were working Tuesday to blast cool, dry air to 33 miners trapped a half-mile underground for more than a month.

All the men have suffered from skin sores, foot fungi or abrasions, and infections could prove dangerous in the sweltering heat and humidity, with rescue at least six weeks away.

Scrapes, cuts and infections like athlete's foot and jock itch are usually just minor annoyances. But trapped as they are in unrelenting 86-degree heat, with humidity at 88 percent, the miners don't have any way of drying out.

In an effort to extend at least one comfort of home to those trapped underground, a fiber-optic cable enabled them to watch a live broadcast of the Chilean national soccer team playing Ukraine on Tuesday. A miniature projector snaked down a bore hole displayed the game on an underground wall, creating an image 50 inches wide.

Chile lost the game, but the video feed of the miners showed them seemingly enjoying the distraction.

When the game ended, however, the dismal conditions continued. The miners could be seen shirtless and sweating on the video feed.

In such an environment, any open wound presents a serious risk, so the miners have been instructed to use extreme caution. A simple cut from moving rocks could lead to dangerous infections, Chilean Health Minister Jaime Manalich told the Associated Press.

Most at risk are diabetics, who face increased complications from skin infections under the best circumstances. There is at least one diabetic among the trapped miners, who has been receiving insulin through the narrow bore holes that have become a lifeline for the miners.

The constant exposure to moisture creates the possibility of infections, especially when the men are living and sleeping together in close quarters and can't shower, according to Dr. Boni Elewski, a dermatology professor at the University of Alabama, Birmingham.

The exposed skin on the feet as well as areas where sweat accumulates, such as around the groin, the neck, under the chin or between fat rolls, could foster sores or fungi - commonly known as athlete's foot or jock itch - that could become infected with bacteria.

Limited hygiene and constant humidity also makes the miners susceptible to an infection and inflammation of hair follicles that causes itchiness.

And then there is gas gangrene, an infection that can start when bacteria commonly found in the soil enters a wound. This bacteria thrives in low-oxygen environments and rapidly kills tissue, making immediate removal of the affected area or amputation of a limb necessary, said Elewski.

"The longer they are there in this situation, the higher the risk that someone will develop a serious skin problem," she said.

It's unclear how long the miners will be stuck underground. The Chilean government has said it could take until December to drill a hole big enough to pull them out, while other experts have said it could be as soon as late October.

Two massive mining drills are being used - one widening one of the existing bore holes and the other forging a new opening - and the government plans to use a third drill to widen one of the other bore holes.

Rescuers have become increasingly sophisticated in their use of three narrow bore holes, each less than 6 inches wide.

But attempts last week to cool the miners' cramped environment with a narrow air hose failed, Manalich said. On Tuesday, rescuers were working to send down a better hose with a compressor that can pump about eight gallons of dry air per minute.

This second hose - which contains separate ducts that can also carry water and fiber-optic cables - will emerge about 60 feet from the shelter where the men have taken refuge, and it remains to be seen how much impact it will have on the overall area where the miners are stuck. The lower reaches of the mine stretch more than a mile below where the main shaft collapsed on Aug. 5.

The installation is being phased in over the next couple days, and the air hose should be working by Thursday, Manalich said. He expressed hope that enough fresh air will make it down so that the miners "feel a difference."

Meanwhile, the first huge drill carving an escape tunnel through solid rock reached a depth of about 370 feet. Already, the miners below can hear the drilling, though the hole is only inches wide and will have to be enlarged before it can be used to pull the men out - a process that will take weeks or more.

The first tunnel is going slowly, because each time a geological fault is exposed, groundwater is released and the walls need to be shored up with concrete.

A second drill, capable of carving a tunnel just wide enough to pull a grown man through, started work Sunday and can advance more quickly. But it has experienced technical delays and has only penetrated some 75 feet.

A third machine, designed for oil exploration, is on its way. That drill has the highest velocity, and is capable of reaching the miners in early November, but could pose greater risks of rock falls in the unstable mine.