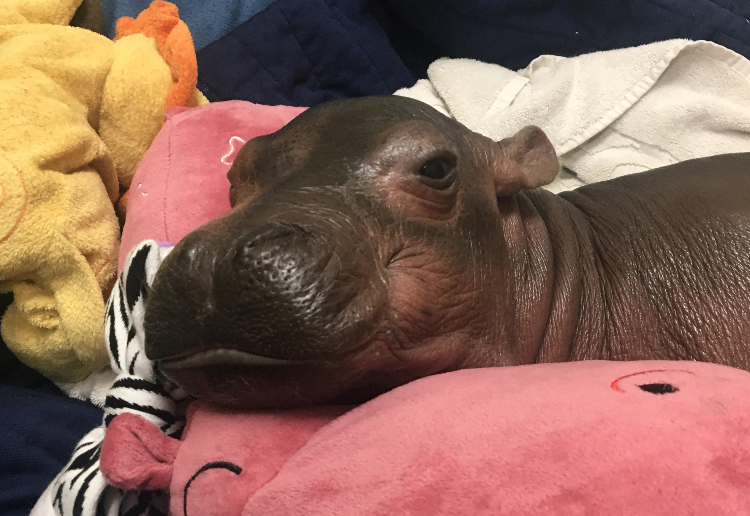 A premature hippo that was born 6 weeks early at the Cincinnati Zoo & Botanical Garden is receiving a little extra care from some medical professionals who are experts when it comes to newborns.

On average, a newborn baby hippo weighs anywhere from 55 to 120 pounds. At birth, Fiona only weighed 29 pounds.

To support baby Fiona and the zoo staffers working around the clock to care for her, nurses at the hospital gave the tiny hippo the same gift they give parents of newborns who “graduate” from the NICU.

The gift basket included a baby book filled with details about Fiona’s early days, a stuffed animal, a pacifier, and four superhero capes signed by 200 staff members. And one of the most special gifts: what NICU nurses call “beads of courage,” a strand of beads representing each of the baby’s medical or life milestones while in their care.

“The NICU team wanted to pass along a gift to show support to Fiona and her caregivers, so they put the care package together,” Rachel Wilson, the NICU clinical director, told CBS News.

Wilson brainstormed the idea with Morgan Schweinfurth, a NICU charge nurse, and the rest of the team quickly jumped on board. She said the nurses had been following updates on Fiona because they “obviously have an affinity for all preemies.”

The nurses said all preemies need a lot of love and TLC. Staff members at the Cincinnati Zoo & Botanical Garden couldn’t agree more, and say the hippo will need everyone’s continued support.

“Nursery and animal care staff are with the calf 24 hours a day providing warmth, nourishment and opportunities to exercise,” a spokesman for the zoo told CBS News. “They are making sure she gets plenty of rest and packing awake time with activities that will stimulate muscles and build strength.”

Fiona has gained a little over 4 pounds since birth, but still remains about 20 pounds under the low end of a normal birth weight for a Nile hippo.

Every day, the little hippo makes progress toward standing.

“She is starting to support her weight for a few seconds at a time,” a spokesman said.

The zoo thanked the NICU nurses by sharing a picture of Fiona’s caretakers posing with a sign and holding up items from the basket.

They can’t wait for the day Fiona can fully take care of herself -- but until that day comes, the baby hippo doesn’t seem to mind all the attention.