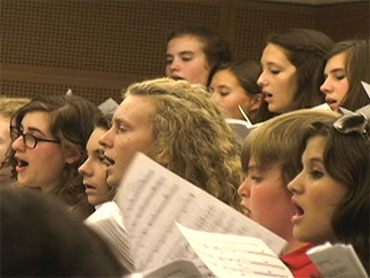 "An enhanced filmgoing experience" - as film composer Howard Shore describes it - would seem an epic of understatements.

He is referring to special screenings of J.R.R. Tolkien's "Lord of the Rings" trilogy, accompanied by 300 musicians and chorus members performing the music live.

While silent films were never really silent - accompanied by orchestras, ensembles or even just a piano player - it is virtually unheard of for a contemporary film to have its musical score played live. (Phillip Glass' music for the documentary "Koyaanisqatsi" is one of the rare exceptions.)

Shore, who won two Academy Awards for scoring "Fellowship of the Ring" and "Return of the King" (and a third for Best Song for the trilogy's conclusion), had previously adapted his score for Peter Jackson's film trilogy as a symphonic suite.

But the Lucerne, Switzerland-based 21st Century Orchestra, conducted by Ludwig Wicki, has performed what are referred to as "projection concerts" - screenings of the films with dialogue and selected sound effects, accompanied by musicians, chorus and soloists playing and singing in sync to the action projected above them.

"We don't try to recreate the sound of the film - that wouldn't really make sense," Shore said.

The first two "Rings" films have already played in Europe, with a "Return of the King" concert premiering in February.

The projection concerts have their U.S. debut with performances of "The Fellowship of the Ring" at New York City's Radio City Music Hall on October 9 and 10, and on October 16 in Michigan, with Wicki conducting the Grand Rapids Symphony. ["The Two Towers" is already scheduled for a New York engagement next Fall.]

Joining the Swiss orchestra will be the Collegiate Chorale and the Brooklyn Youth Chorus, a Grammy Award-winning ensemble of New York City elementary and high-school students who have performed with the likes of the New York Philharmonic, Elton John and Alicia Keys.

Shore says the chorus members are an essential part of his music for the "Rings" films.

"The piece is principally a choral work," he said. "It uses all of Tolkien's languages - languages that he created specifically for these stories. And in 'Fellowship of the Ring,' five different languages are used by the chorus.

"In the book there [are] many moments where he pauses for poems and for song lyrics, and this was a way of putting poetry back into the story through the use of the choir with the orchestra."

The landmark score used different languages and musical styles to reflect the different inhabitants and cultures of Middle Earth - hobbits, elves, orcs, uruk-hai, ents, wizards and men - with children's voices used effectively for both hobbits and for the Elvish-inscribed Ring itself.

The Brooklyn Youth Chorus Academy's founder and artistic director, Dianne Berkun, took the young singers through their paces last week, and as they found out, becoming the voices of the One Ring itself was not easy.

"We worked with David Salo, a Tolkien translator who translated some of the English poems for us, and Roisin Carty, an Irish linguist who taught the choir to sing specifically in these languages," Shore said. "What we do when we do the live performances is, we recreate them using international phonetics so they're always accurate to the sound Tolkien was after."

As foreign as the words may be, Shore said the film's story does capture the young cast, many of whom were mere toddlers when the trilogy's first installment came out in 2001. "It's been a few years!" laughed Shore.

He suggested that, given the film's PG-13 rating, some might have to bring a note from their parents to attend.

When asked by one student which of his "Rings" score was his favorite, Shore demurred, but suggested the first film, "Fellowship," was special as our first musical introductions to the worlds of Lothlorien, Rivendell and the Shire.

Many of the singers indicated they were familiar with the "Lord of the Rings," though far fewer had read the books.

"You see them becoming interested in the story," Shore said, of his experience with the projection concerts. "And you see a lot of the other choir members, the adult choir and the orchestra, reading the book - you see the book around a lot. It's an incredible, wonderful story, and I think people delve back into it if they have read it, and if they haven't it opens up a whole new world.