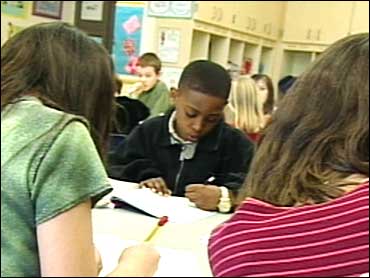 By all appearances, Chloe Clark elementary school in Dupont, Wash., is typical of U.S. schools, reports CBS New correspondent Jerry Bowen, with parents dropping off their children, weighed down by backpacks, at school for another day of learning. But for some kids, the lessons are especially hard.

"So many of our moms and dads have had to leave to be in the military," says teacher Pat Carney.

One student, Dominique, has a father who had already been deployed and a mother who soon will be overseas, too.

The father of another student, Rebecca, has just arrived home from overseas duty.

Not far away are the gates of Fort Lewis, Washington, a major Army base that has sent thousands of troops to the Gulf War.

The town is a new planned community that didn't plan for so many children to be left behind. DuPont has streets blanketed with yellow ribbons to show support for its troops.

"Even before the fathers and mothers were deployed, [they were] acting out issues at our school," says principal Gary Yoho. "Children crying out in a number of different ways, just looking for help and support from the school."

Carney saw it, too.

"One of my little girls knew almost a month ago that her dad was going to be deployed and he's never been far away from here," Carney says. "She would be perfectly all right in the classroom and then all of a sudden, just a puddle of tears just streaming down her face."

So, before the deployments began, Chloe Clark began once-a-week group counseling sessions. It encourages students to share their feelings and talk about absent parents.

Eight-year-old Mariah brought to school the military medals and coins her father gave her.

And 10-year-old Dominique proudly wears the watch his father left him.

"My dad gave me this watch so I can think of him - good thoughts about him," says Dominique.

But sometimes it's very hard for the kids, especially for Dominique, whose mother is about to be deployed too.

"It kind of makes me sad because sometimes I think that they might die soon," he says. "I have thoughts like that whenever I'm sad."

Carney says having the pupils start talking to each other "has really had a big impact on this school."

More often than not, she says, it's the kids, not the adults, who are making a difference by helping one another cope with the new reality.

"They're just so tender. They're always reaching out to each other," says Carney. "Adlee went over and put her arms around Molly said, 'Oh don't worry, Molly. My daddy's a doctor and he's going to go to the war and when your daddy gets shot, my daddy will fix him up.' And it seemed so logical to her."

And when 10-year-old Dominique feels down, a friend tells him his parents will be OK.

"'They'll come back soon, safe. You don't have to worry about nothing,' that's what he says to me," says Dominique. "All I do, once he tells me that, I just put on a smile on my face and just forget about the whole thing. But usually it comes back in my mind and I just think about it."

In the main entryway at Chloe Clark, there's a growing photo gallery of the parents who have gone off to serve a place of pride for the children left behind.

And each week, more yellow ribbons are tied to the trees out on the school grounds. But the day Dominique and the others can't wait for is a very special occasion. That's the day they get to take the ribbons down.