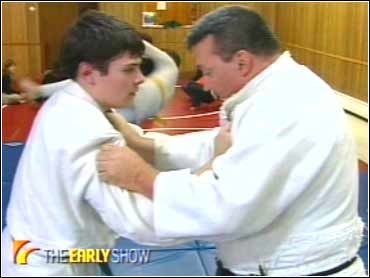 Near the coal fields of southern West Virginia, Correspondent Steve Hartman, who travels around the country interviewing people plucked from a phonebook, found a phonebook. But once he started digging, he hit a gold mine in Wyoming County.

The lowest grade he has ever received in school is "maybe an A minus," he says.

Not one B, not ever - and yet somehow he still finds time for Boy Scouts, scouting girls and judo.

Justin's father is David Stover, a high school physics teacher, who, thanks to his son and judo, is becoming all too familiar with Newton's laws as Justin has ended up throwing him to the floor - not once but twice.

And yet despite appearances, they get along really well. After Justin's folks got divorced, he chose to live with his father, who says so far raising Justin has been a breeze. He never has to tell him to do his homework and hardly even reads his report cards.

"Don't even need to look at any more of that," he says.

And when he sends him out to get groceries, Justin only accepts the money that he needs for the errand.

Still as unique as they obviously are, their story is as common as coal around West Virginia.