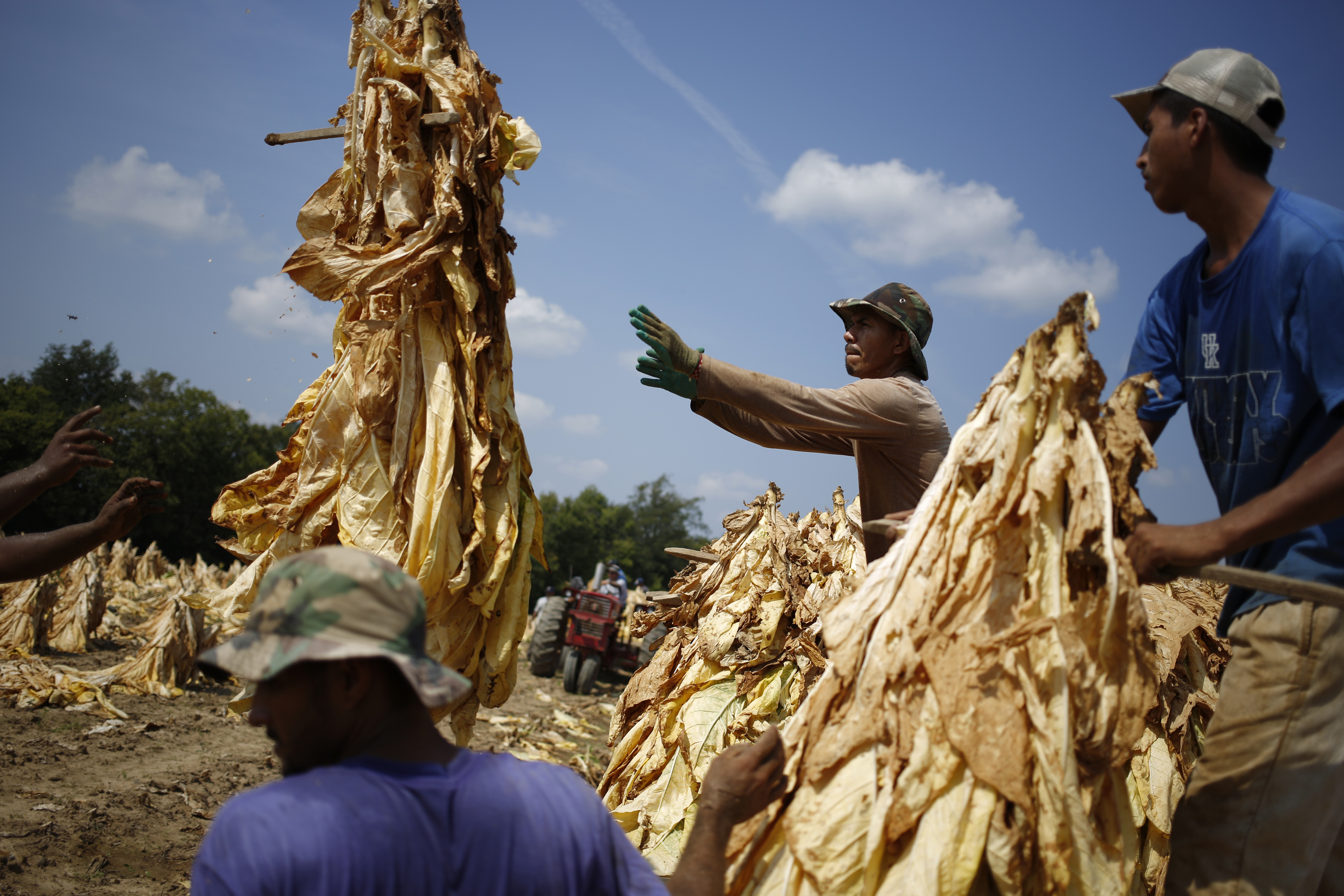 RICHMOND, Va. -- You may have to be at least 18 to buy cigarettes in the U.S., but children as young as 7 are working long hours in fields harvesting nicotine- and pesticide-laced tobacco leaves under sometimes hazardous and sweltering conditions, according to a report released Wednesday by an international rights group.

The Human Rights Watch report details findings from interviews with more than 140 children working on farms in North Carolina, Kentucky, Tennessee and Virginia, where a majority of the country's tobacco is grown. The group acknowledges that most of what it documented is legal under U.S. law but aims to highlight the practice and urge both governments and tobacco companies to take further steps to protect children from the hazardous harvesting of the cash crop that has built businesses, funded cities and influenced cultures.

"The U.S. has failed America's families by not meaningfully protecting child farmworkers from dangers to their health and safety, including on tobacco farms," said Margaret Wurth, children's rights researcher and co-author of the report. "Farming is hard work anyway, but children working on tobacco farms get so sick that they throw up, get covered by pesticides and have no real protective gear."

Children interviewed by the group in 2012 and 2013 reported vomiting, nausea and headaches while working on tobacco farms. The symptoms they reported are consistent with nicotine poisoning often called Green Tobacco Sickness, which occurs when workers absorb nicotine through their skin while handling tobacco plants.

According to the report, U.S. agriculture labor laws allow children to work longer hours at younger ages and in more hazardous conditions than children in any other industry. With their parent's permission, children as young as 12 can be hired for unlimited hours outside of school hours on a farm of any size. And there's no minimum age for children to work on small farms.

In 2011, the Labor Department proposed changes that would have prohibited children under 16 from working on tobacco farms, but they were withdrawn in 2012.

Human Rights Watch met with many of the world's biggest cigarette makers and tobacco suppliers to discuss its findings and encourage them to adopt or strengthen policies to prevent the practices in their supply chains.

The companies are concerned about child labor in their supply chains and have developed standards, including requiring growers to provide a safe work environment and adhere to child labor laws, the group said.

"The conditions are inhumane and they should improve them," said 17-year-old Erick Garcia, of Kinston, North Carolina, who has been working in tobacco field since he was 11 to help his family earn more money.

Additionally, Garcia said kids should primarily focus on school and shouldn't be in the fields: "That's not a place for children," he said.

One 12-year-old boy in North Carolina told said he developed a "horrible" headache while working.

"It felt like there was something in my head trying to eat it," he said.

Republican Kentucky state Sen. Paul Hornback, who has worked in tobacco fields since he was 10 and now farms about 100 acres of tobacco in Shelby County, Kentucky, said while he adheres to federal regulations to keep his workers safe, he doesn't believe further restrictions are needed.