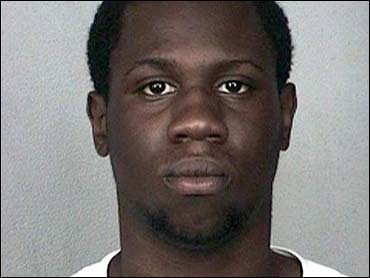 A teen who was given a second chance after he beat and stomped a little girl to death when he was 12 has been accused of holding up a pizza delivery man at gunpoint.

Lionel Tate was jailed without bail for a court appearance via video hookup Wednesday.

Tate touched off a debate over Florida's practice of prosecuting juveniles as adults when he became the youngest person in modern U.S. history to be sentenced to life in prison for the 1999 killing of 6-year-old Tiffany Eunick.

His conviction and sentence were overturned on appeal in 2004 — after he had served three years in prison — and prosecutors gave him a plea bargain that placed him under house arrest for a year, followed by probation for 10 years.

"I think they got the wrong guy," Tate's attorney, Jim Lewis, told The Miami Herald. "Lionel told me he did not do this. ... He said he got there when it was all over."

Kathleen Grossett-Tate, Tate's mother and a Florida Highway Patrol trooper, told the newspaper that her son was innocent and that she would stand by him as she did during the murder case.

"He would be the dumbest man ever to be born if he should have done something like this knowing what we have been through, facing life imprisonment for the rest of his life," said Rev. Dennis Grant, part of a team of community and religious leaders who lobbied the state for Tate's early release. "I don't buy that he is guilty and we are still standing with Lionel at this time."

Tate again faces the possibility of a long stretch in prison, especially since a judge last October said he would have "zero tolerance" for probation violations after Tate was caught with a knife blocks from his home late at night.

Tate's critics aren't surprised he is in trouble again.

"If we'd got him the kind of help and attention he needed early on, maybe it would never have gotten to this point," Michael Brannon, a forensic psychologist who examined Tate in 1999 and found that Tate had a "high potential for violence," told the Fort Lauderdale Sun-Sentinel.

The hulking, 160-pound boy had claimed at first that he killed Tiffany Eunick while imitating pro wrestling moves he had seen on television, then later said he accidentally hurt the girl when he jumped on her from a staircase.