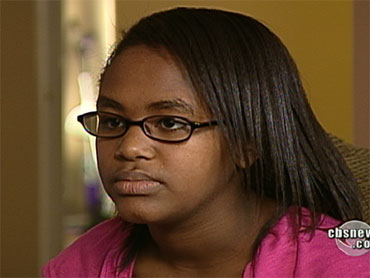 Videotapes showing poor orphans from third world countries melt the hearts of prospective parents every day in this country.

Three children, sisters from Ethiopia are shown in a video - ages, you are told, 7, 4 and 6. Their mother is dead, their father dying of AIDS. A life of prostitution is all but assured - if not adopted - saved - by a loving American family.

It was just such a pitch that spoke to Katie and Calvin Bradshaw, reports CBS News chief investigative correspondent Armen Keteyian. They adopted all three girls through a U.S. agency, Christian World Adoption.

"Aside from the gender of the children, everything else proved to be a complete lie," said Katie.

While their mother was dead, their father was healthy and very much alive. He was living, by local standards, a middle-class life - an extended family able to take care of the girls as middle sister Meya showed us first hand.

"My godmothers, my aunt, those are my mom's friends, my uncles, my dad, my dad's friends, that's my brother," she said.

In the last year adoptions from Ethiopia to the U.S. have skyrocketed - growing faster than any other country in the world. They have risen from 731 in 2006 to more than 2,200 last year. That's nearly six children per day.

Now a CBS News investigation has discovered that growth has turned Ethiopia into fertile ground for child trafficking - a country in which some American agencies and their staff engage in highly questionable conduct.

Adoptive families allege that many children brought to the U.S. are not even orphans, that prospective parents are misled about a child's health and background, that local families are recruited - and sometimes even paid - to give up their kids.

Which the Bradshaw sisters say is exactly what happened to them.

"For you to be adopted?"

Christian World Adoption is one of 70 agencies licensed to operate in Ethiopia. Beyond the alleged payment to their father, the Bradshaw sisters say they were told by local employees of Christian World they were only coming to America for an education; that they could return home when school was out. Not true. In fact it's virtually impossible to reverse an adoption in Ethiopia.

"I thought I was going to be kind of like an exchange student," Journee said. "Honestly, I never knew that I'm going to be here forever."

"We have watched our kids grieve and cry and scream and melt down from the bottom of their souls over the loss of their country and their family," Katie Bradshaw said.

"If you want your child to be adopted by a family in America you may stay," said Michelle Gardner. She spoke those words on a tape produced by Christian World for American parents seeking to adopt in Ethiopia. And now says she deeply regrets it.

"I was aware of a number of times when things were problematic," she said. "And several families where children came over and the children didn't understand that the adoption was permanent."

Christian World was founded back in 1991 by Bob and Tomilee Harding. In 2008, records show, the non-profit agency took in nearly $6 million dollars - charging a fee of about $15,000 per child.

Citing ongoing litigation, the Hardings declined to speak with CBS News at their offices in Charleston, South Carolina.

"How do you respond to charges that CWA knowingly deceived or misled adoptive parents through the adoption process in Ethopia?" Keteyian asked.

"Those allegations are completely unfounded," said Curtis Bostic, attorney for CWA. He told CBS News he was prohibited by law from discussing specific adoption cases.

"I'm talking to parents who are really upset," Keteyian said. "Who are devastated with their dealings with CWA."

"Sometimes, people are upset when they just simply misunderstand things," Bostic said. "I believe that's exactly what you're hearing. There have been thousands and thousands of adoptions conducted by CWA all over the world. Is there going to be a handful of folks who misunderstand, who - or who aren't happy with their adoption? There's going to be, and we regret that."

The Bradshaw family lives with its own set of regrets. Parents who trusted and believed they were doing the right thing. The three young girls are learning to adopt a life far from the country they still call home.