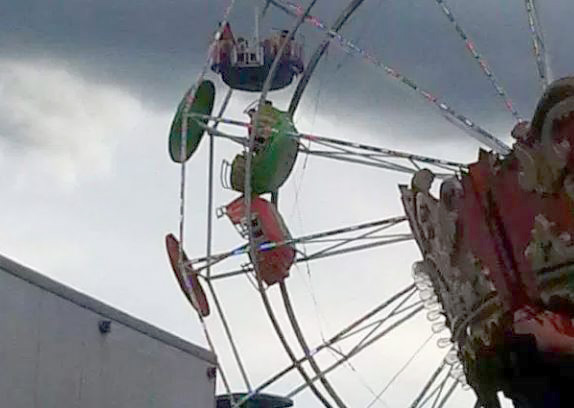 GREENEVILLE, Tenn. -- At least one of three people who fell from a Ferris wheel during a county fair in Tennessee suffered a head injury and remains hospitalized in serious condition, police said Tuesday.

Greeneville Police Capt. Tim Davis said during a news conference Tuesday that "two of the children were alert and answering questions," according to CBS affiliate WJHL-TV.

Davis added: "I can't tell you whether the third was or not. The third child ... does have a head injury and was intubated last night and is still in the hospital."

Davis said the investigation into the incident is ongoing, but it appears the three fell when the car flipped over. The oldest was a 16-year-old girl.

Asked about reports that the car was rocking before it flipped, Davis said police have not been able to confirm that but they are still interviewing people.

Witnesses said the trio fell 30 to 45 feet from the Ferris wheel out of the same basket.

All who fell were taken to a children's hospital in Johnson City -- two by helicopter and one by ambulance -- according to Greene County-Greeneville EMS Operations Director T.J. Manis.

Gregory Lynthacum, of Washington County, Tennessee told WJHL he saw three young girls fall from the ride when their car appeared to get caught as the wheel lifted them upward, spilling them out.

Bobby Holt, acting president of the Greene County Fair, said during a news conference Tuesday that all rides will remain closed until inspections are complete.