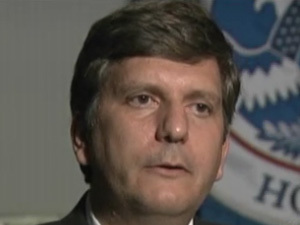 (CBS/WFOR) MIAMI - The man who heads Miami's office of Immigration and Customs Enforcement is reportedly under investigation for possession of child pornography.

Federal agents searched the Parkland home and west Miami-Dade office of 50-year Anthony Mangione over the weekend looking for images on child pornography on his computers, according to The Miami Herald.

Mangione took the reigns of the South Florida regional ICE office in 2007. He has frequently spoken out against "predators" who share pornographic images of children over the internet.

The paper reports Mangione could not be reached for comment over the weekend. When asked for a comment on the investigation, the ICE office in Washington D.C. referred questions to the Department of Justice.

Mangione was planning to retire this summer.