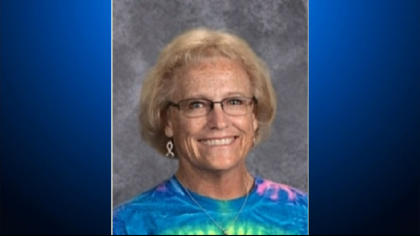 LAFAYETTE, Colo. -- A Boulder Valley School District teacher now faces child abuse and assault charges for allegedly forcing a child to stand for the Pledge of Allegiance earlier this month, CBS Denver reports. Lafayette police say Karen Smith, a physical education teacher at Angevine Middle School, grabbed a boy by his jacket, lifted him to his feet and took him out of class on February 1. Police were called.

The school district released a letter it sent to parents Tuesday saying, "Today we learned that the Boulder County District Attorney's office has formally charged Angevine Middle School Physical Education Teacher Karen Smith. Ms. Smith has served Boulder Valley School District for 20 years and is currently on paid administrative leave. We are cooperating with the District Attorney's Office and respect their decision on this matter. We are unable to comment further because it remains a personnel matter that the school district is actively investigating."

The school district allows students to stand or sit during the pledge, district spokesperson Randy Barber told the Denver Post.

A parent waiting to pick her child up at the school the day after the alleged incident told CBS Denver her daughter knows Smith as a "strict" teacher but has never had an issue with her.

Two other parents who spoke to CBS Denver off camera said they believe the story has been "blown out of proportion," and expressed disappointment.