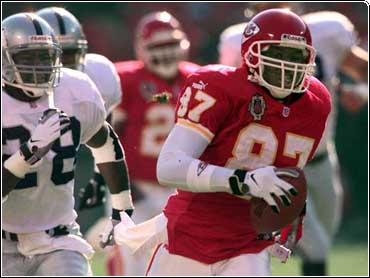 Tamarick Vanover, a kick return specialist for the Kansas City Chiefs, pleaded guilty Tuesday to assisting in the sale of a stolen vehicle and is now cooperating in a broad federal investigation.

In an affidavit last month, the FBI said the investigation was centered on "a large scale, organized, and structured organization involved in the distribution of cocaine and marijuana."

"I can't comment about that ongoing investigation other than to say we'll move forward," said Hill, who also refused to say whether any other NFL players might be involved.

In an affidavit filed earlier this year in connection with drug distribution charges against Vanover's personal assistant, the football player's name was mentioned repeatedly.

Bam Morris, a running back for the 1999 Chiefs, was mentioned once. Morris, who has announced his retirement from the NFL, has not been charged.

Vanover, 25, whose touchdown punt return this season sparked the Chiefs to a 16-10 victory over Denver, faces punishment of up to 10 years in prison and $250,000 fine.

A short time earlier, before a magistrate, Vanover was released on his own recognizance.

Vanover could face further charges. It seems unlikely he will be back with the Chiefs next year.

"As is the case with any employer, we believe in the sanctity of the legal system," Bob Moore, a Chiefs spokesman, said in a statement. "The legal system has run its course in this matter and the issue has been addressed to the requirements of law."

NFL spokesman Greg Aiello said the league would "review the case to determine whether the player is subject to possible counseling and disciplinary action."

The charge stemmed from the theft of a 1999 Ford Expedition from a Kansas City dealership and its sale in Tallahassee, Fla., the U.S. attorney's office said. Tallahassee is Vanover's hometown.

A sentencing date has not been set.

The 11-page plea agreement commits Vanover to providing all information he possesses about the stolen vehicle charge and "any other federal or state crimes about which he has knowledge or in which he participated." The document contains no details of what those crimes might be.

Federal court records have linked the ring to a smuggling operation based in Fresno, Calif., with ties to Kansas City and Nashville, Tenn. That investigation, which began in November 1997, already has led to drug-trafficking convictions of at least ix men and pending criminal charges against seven others.

Hill declined to speculate where the investigation might go from here.

"At any moment some information might come in that might change the direction and speed of the investigation," Hill said. "We'll exhaustively look at all the information we have and go forward."

Vanover and his attorney left immediately after entering the plea, and offered no comment.