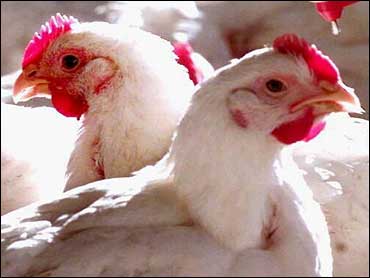 
The normal topics of diplomacy -- the Middle East, Kashmir, Iraq, terrorism, NATO -- have to be set aside in favor of an update on what has become a nagging diplomatic and international trade dispute: the export of American poultry to Russia.

Suppliers in more than 38 states now do more than a billion dollars a year in business sending chicken legs and other frozen chicken products to Russia, making poultry America's largest export to Russia, according to U.S. officials. The U.S. share of the poultry import market in Russia has gone from 30 percent in 1997 to nearly 70 percent last year, an increase which has caused, according to some U.S. officials, Russian officials to seek tighter restrictions on American products.

Whatever their reasons, the Russians have been impeding U.S. poultry imports since this past spring, causing American officials from the Departments of State, Agriculture and Commerce, as well as the U.S. Trade Representative's office, to spend a lot of time working to solve the problem.

No less interested are senators and representatives on Capitol Hill who represent the poultry producers and processors in many mid-Atlantic, southern and Midwestern states. Senator Joseph Biden, the Democratic Chairman of the Foreign Relations Committee is keenly interested, and not only because the Russians are involved. Biden represents Delaware, where the poultry industry is huge in the state's economy.

What has now become a full-fledged foreign policy and trade problem started as a smaller spat which was supposed to have been settled in time for the summit meeting between Presidents Bush and Putin in Moscow this past May. It wasn't, and since April there have been numerous trips and negotiating sessions by officials from both countries, including visits to U.S. poultry processing plants by Russian officials.

While it's not exactly being talked about as a "chicken war," it is getting attention at the highest levels. During a NATO meeting in Iceland in May, Secretary of State Colin Powell told reporters "…right now we are in a poultry dispute with Russia. So I am more worried about chickens going back and forth than missiles going back and forth. This is good."

Technical experts in Moscow and Washington are still "dotting the i's and crossing the t's," according to State Department officials familiar with the negotiations. The last stumbling block seems to be a new veterinary certificate which would give Russian's all the assurances they require that what America is sending them by the container load is healthy.

"It's come down to an issue of veterinary health and food inspections," says one U.S. official. In Washington, some officials suspect part of the problem is coming from Russia's own poultry industry, which sees American poultry products gaining too large a share of the Russian market.

Officials in Washington say an agreement is "very, very close." That's good news not only for U.S. chicken farmers and processors but also for any Russian who's got a hankering for a good, imported chicken leg.