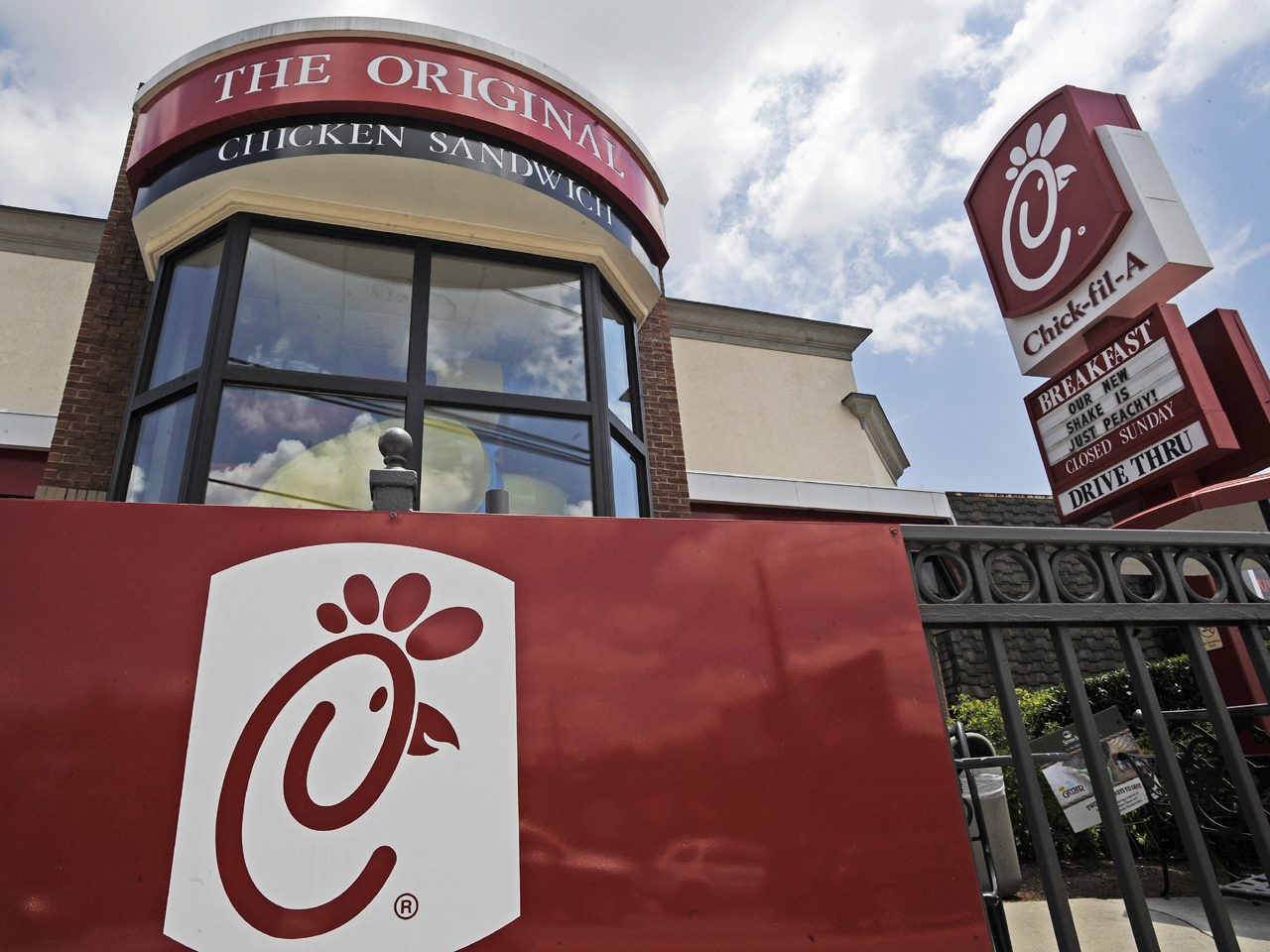 (CBS News) Controversy over the fast food chain Chick-fil-A's ties to conservative causes has been simmering for years, but it only reached a boiling point in recent days when national gay rights groups and high-profile figures like Mike Huckabee began weighing in.

The controversy is becoming more political in nature as elected officials start to take sides on the matter and discuss how best to address the chicken joint's political activism. San Francisco Mayor Ed Lee on Thursday night was one of the latest political leaders to suggest Chick-fil-A should stay out of his city. New York Mayor Michael Bloomberg, meanwhile, said Friday that the politicians actively working to block new Chick-fil-A restaurants are going too far.

Chick-fil-A president Dan Cathy has long made his political leanings known, but activists say the issue became a catalyst for action once Cathy publicly embraced them even more in recent interviews. While conservatives are lauding the company for maintaining Christian values, gay rights activists say the company stands in stark contrast to other major corporations that are expressing their support for gay rights. And in the face of all the pressure, Chick-fil-A is going out of its way to clarify it does not discriminate.

"Very disappointed #ChickFilA doesn't share San Francisco's values & strong commitment to equality for everyone," Lee, mayor of the famously gay-friendly California city, tweeted Thursday night, adding, "Closest #ChickFilA to San Francisco is 40 miles away & I strongly recommend that they not try to come any closer."

Bloomberg, meanwhile, said in a WOR Radio interview Friday morning that there'd be no efforts to keep Chick-fil-A out of New York, calling proposed bans of the restaurant a "bad idea."

"You can't have a test for what the owners' personal views are before you decide to give a permit to do something in the city," Bloomberg said. "You really don't want to ask political beliefs or religious beliefs before you issue a permit, that's just not government's job."

Bloomberg's remarks follow strong statements from political leaders in Chicago and Boston taking a stand against the restaurant's political affiliations.

On Wednesday, Chicago Alderman Joe Moreno said he wants Chick-fil-A to adopt a written anti-discrimination policy before it is granted a permit for a new restaurant in Chicago. "There are consequences for freedom of speech (and) in this case the consequences are... you're not going to have your first free-standing restaurant in Chicago," he said. Chicago Mayor Rahm Emanuel similarly said Chick-fil-A's values don't line up with Chicago's, and thus a restaurant there "would be a bad investment, since it would be empty."

Moreno clarified on CNN Friday morning, "It's not about what people believe or what they say. That's protected, and I would be the first to protect any of that. If those beliefs or those sayings transfer into a policy that discriminates in hiring or in serving, then that's when I have an issue with it or the community would have an issue with it."

Moreno and other politicians have spoken out against the company in response to remarks from its president -- not any specific allegations of discriminatory practices. Still, he pointed out on CNN that Chick-fil-A president Dan Cathy used the word "we" in describing his beliefs, suggesting he was speaking for the company.

Moreno said he's been working with Chick-fil-A on the matter for several months and that the restaurant has already verbally agreed "they will no longer donate any dollars to any organization -- left, right or center -- that has a political agenda."

Last week, Chick-fil-A issued a statement saying it would "leave the policy debate over same-sex marriage to the government and political arena." The company added that it has always aimed to "treat every person with honor, dignity and respect -- regardless of their belief, race, creed, sexual orientation or gender."

Like Moreno, Boston Mayor Menino clarified his remarks this week after initially warning Chick-fil-A that "it will be very difficult" for the restaurant to obtain a license for a Boston restaurant. "I can't do that. That would be interference to his rights to go there," Menino later said. "I make mistakes all the time. That's a Menino-ism."

Philadelphia City Councilman Jim Kenney learned of the controversy after reading about Menino's letter and decided to send Cathy a letter himself decrying his position. Kenney will also introduce a resolution before the City Council this year condemning Chick-fil-A. Kenney told CBSNews.com he was speaking out "to highlight bigotry and give people information."

"I have no interest in shutting him down or chasing him out of the city," he said of Cathy. "I just think that people should know when they spend their money when some of those dollars are contributing to groups that promote hate."

Kenney said he's spoken to constituents who are both for and against his resolution.

"People who are mostly con continue on with the religious aspect," he said. "American civil liberties are not ordained by religion, they're ordained by a free and democratic government. There were times when religion was used to explain slavery and lots of other ills."

While Moreno and Menino clarified their remarks, conservatives are still rallying support for the restaurant. Former Arkansas Gov. Mike Huckabee and former Sen. Rick Santorum (both once GOP presidential candidates) are, for instance, supporting "Chick-fil-A Appreciation Day" on August 1. Evangelical leader Rev. Billy Graham issued a statement Wednesday applauding Chick-fil-A and Dan Cathy for taking a "bold stand for the biblical definition of marriage between a man and woman in a culture that has grown openly hostile to the Christian faith and its followers."

The conservative Family Research Council sent its supporters an email on Friday, signed by its evangelical leader Tony Perkins, lamenting that Chick-fil-A's "simple affirmation of biblical truth has sent homosexual activists into a frenzy" and asking supporters to support the restaurant.

Chick-fil-A's conservative ties have long been a matter of controversy. In fact, the gay rights group EqualityMatters.org has in recent years regularly reported that Chick-fil-A's charitable arm, the WinShape Foundation, gives millions of dollars to groups like Family Research Council.

The restaurant's affiliations have spurred several protests. In February of this year, plans to bring a Chick-fil-A to Northeastern University were blocked after students turned in a petition against the restaurant. When Chick-fil-A introduced a food truck to Washington, D.C., protesters organized by the gay rights group Human Rights Campaign were there to greet it.

In an interview with the Baptist Press, Cathy said he was "guilty as charged" when asked about his "support of the traditional family." Furthering his views on the radio program "The Ken Coleman Show" in June, Cathy said, "I think we are inviting God's judgment on our nation when we shake our fist at Him and say 'we know better than you as to what constitutes a marriage,' and I pray God's mercy on our generation that has such a prideful, arrogant attitude to think that we have the audacity to define what marriage is about."

Dan Rafter of the Human Rights Campaign told CBSNews.com, "These facts have between out there for a while, but I think it's been Dan Cathy's very proud embrace of them that put them on our radar again."

"We're seeing increasingly that businesses across the spectrum are recognizing the importance of embracing legal equality" for gays, Rafter continued. He pointed to Amazon.com founder and CEO Jeff Bezos' decision to donate $2.5 million to a coalition working to defend Washington state's same-sex marriage law.

"That isolates Chick-fil-A," he said. "They're increasingly an outlier in not only the donations they're making but in how proudly they're making them. It illustrates that Chick-fil-A is on the wrong side of history here."

Whether or not Cathy is on the wrong side of history, some argue that CEOs like Cathy and Bezos could learn from Bill Marriott -- the conservative hotel magnate who keeps his Mormon beliefs out of his business -- that staying out of politics can be good for the bottom line.