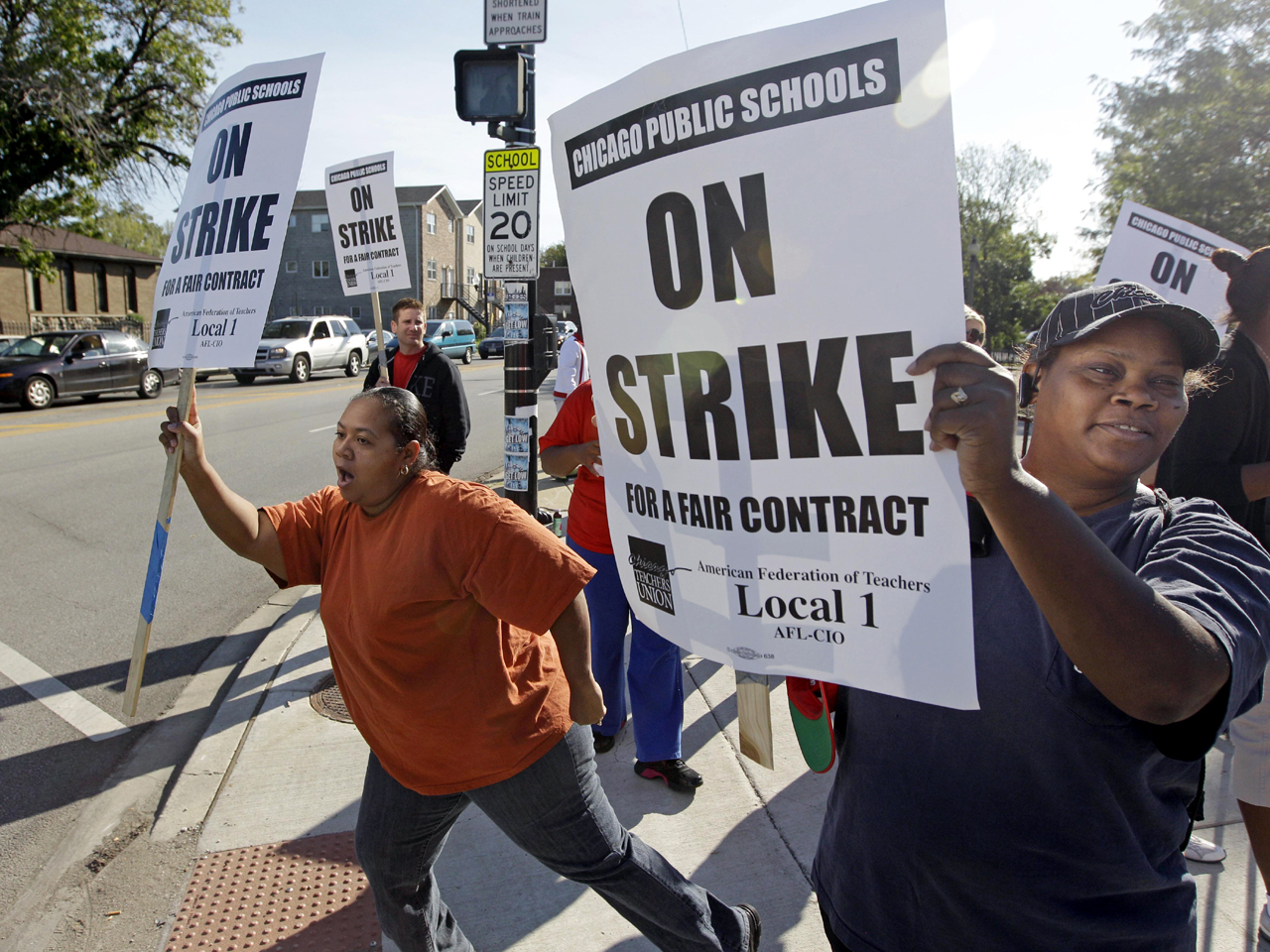 (CBS News) CHICAGO - For a second straight day Tuesday, 30,000 Chicago Public Schools teachers are out on the picket lines instead of in the classroom, CBS Chicago station WBBM-TV reports.

Both sides were back at the negotiating table to try to hammer out a deal. Efforts to do so failed Monday after 12 hours of bargaining.

The two sides continue to butt heads over the practice of using student test scores as the criteria for teacher evaluations, and job placement for laid-off teachers when a school is shut down.

The two sides seem to have different opinions on how far along they are in negotiations.

Walking into the law office where the negotiations are taking place, Chicago School Board President David Vitale told WBBM-TV the two sides are not very far apart, and he believes the contract could be resolved before the end of the day Tuesday.

Vitale said the district's bargaining team worked late into the night to come up with some proposals.

"We think the process is moving ahead, and we see no reason why we won't solve this, and we have an urgency to get this solved because we think our kids ought to be in school," Vitale said Tuesday morning. "We think this was a strike of choice, and sometimes we don't feel the same urgency on the other side, to be honest."

But Chicago Teachers Union President Karen Lewis said previously that the school board had "made no movement." She said she is looking forward to what the district will offer Tuesday.

Lewis also said the mayor can't force the teachers to go back to school without a contract deal, and she doesn't see there being a resolution Tuesday - especially if they there's no agreement on the two unresolved issues.

"Why, now, you can't hire them? You already hired them. They are already members of this organization," Lewis said.

As to the evaluations, she added: "We're also looking at the process of the teacher evaluations. We don't like the amount that they're going to do with the standardized testing. I wish people would stop thinking that standardized tests tell us anything other than the socioeconomic background of our students. We don't control for that."

Vitale emphasized that the city is required by law to evaluate teachers based on standardized test scores, and the district is working on an acceptable compromise.

As far as recalling displaced teachers, the city offered to enter them in pools where they could be chosen to fill positions.

Those pools depend somewhat on why those teachers were displaced.

"The bottom line is when you look at the facts, what are they really fighting for? Name three things they're fighting for. They haven't clearly articulated that to the parents. We're part of the stakeholders in this too," said Lee Earle, the father of twin boys who attend Chicago schools. "I spent $240 in child care the last two days. I'm not happy about that, and I'm sure most parents can't afford that. So if the teachers really care, show me how they're taking care of my children."

Meanwhile, teachers, community activists, and parents are again picketing outside the Chicago schools' headquarters and at various schools.

They sounded energized on the picket line as they demonstrated in front of a giant inflatable rat, which unions often display as strike targets.

The volume level and the signs told the story from teachers' point of view - "We want fair, not political, teacher evaluations. We want a fair contract now."

The union announced Sunday night its members would walk off the job because it had not reached agreement on a new contract with the school system. It is Chicago's first teachers' strike in 25 years and has put Mayor Rahm Emanuel in a politically embarrassing light.

Emanuel, who has had a rocky relationship with the CTU during his short tenure as mayor, said the picketing is an unnecessary "strike of choice." He urged both sides to work out a deal and get teachers and kids back in classrooms.

The city has opened 144 of its buildings during the strike for half-days so that students can occupy their time with activities and eat breakfast and lunch. Still, parents of Chicago school children have been left scrambling to find all-day supervision for their kids.

The teachers union and the city have agreed on a number of issues, including salary and a longer school day.