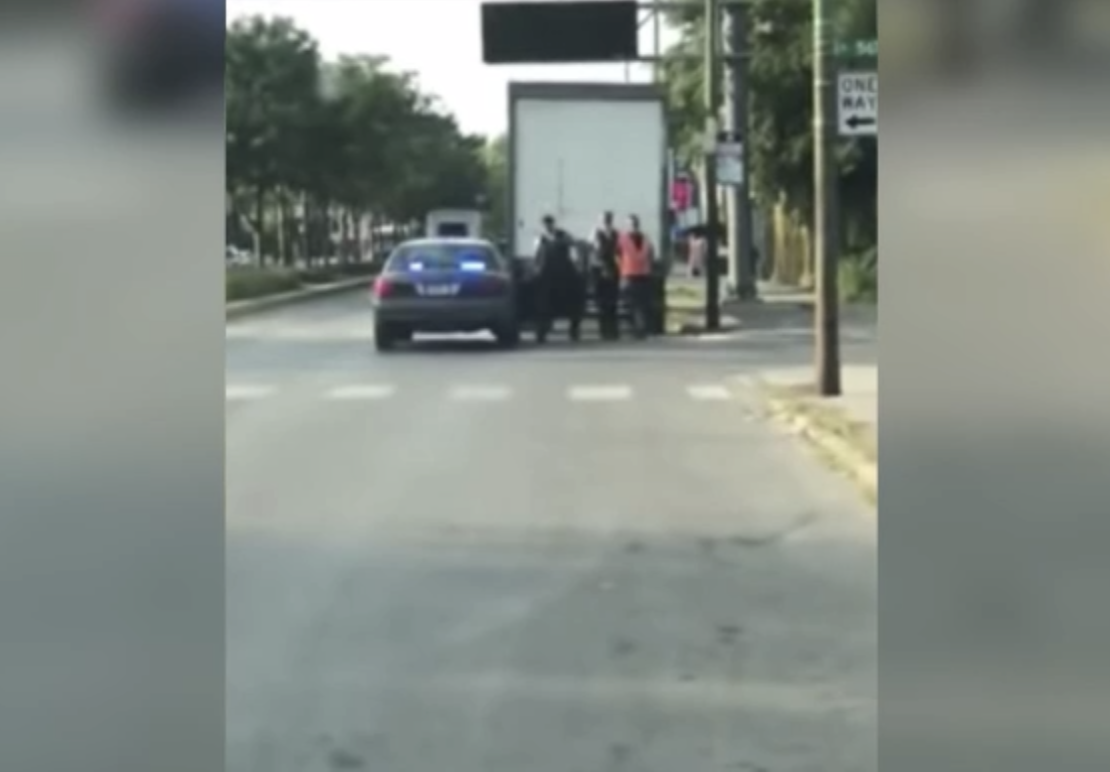 Some Chicago residents are outraged by a police operation that deployed a so-called "bait truck" to nab thieves in the city's Englewood neighborhood last week. Angry residents allege police from a major railroad line left tractor trailers filled with expensive merchandise to lure people into stealing, but police say the operation was necessary to bust thieves who have broken into cargo shipments in recent weeks.

Two videos taken by separate men at different times show a white tractor trailer parked at several locations around the neighborhood. Community activist Charles Mckenzie posted a video of a truck to Facebook on Aug. 2, showing an unmarked white tractor trailer parked under an overpass. Mckenzie says the trailer was apparently filled with expensive shoes. "I heard it was Nikes and red bottoms [Louboutins]," he said in an interview with CBS News.

"It was unmarked, it was locked securely, and its contents were invisible to passersby. The suspects saw a parked, unmarked trailer and then proceeded to cut open the safety seal with box cutters, broke into the back of the trailer and only then did they find retail shoes in unmarked brown boxes, previously secured and hidden inside," Terpay told CBS Chicago.

"It was parked near a place where guys were playing basketball," Mckenzie told CBS News. "You park there in the poorest area and you think no one would want to go in [the truck]?"

Mckenzie was not the only person to capture video of the alleged "bait truck." Martin G. Johnson filmed a similar white tractor trailer the next day on Aug. 3. "He followed them the second day to see how they really do it," Mckenzie said. "It's like they pull the truck over, they arrest the [driver], and I guess they wait for someone else to jump in the truck."

Johnson's video shows shows him following the truck, which he believed to be the same one Mckenzie saw, until it's pulled over and the driver is arrested. He calls this is a "faked arrest," and says the cops are intentionally leaving the truck behind after taking the driver away in a cruiser. He said the cops then waited to see if anyone attempted to enter the truck.

"Don't touch this truck right here, it's a setup," Johnson warns passersby in the video. When one man gets close to the back of the truck, police officers pull up and start talking to him. The man has a verbal argument with several officers. Toward the end of the video, a new truck driver arrives and drives away.

Mckenzie disputes the railroad's claims that the trailers were locked when left by police. "There wasn't [a lock]. How would he cut it off? ... Martin's video shows there was no lock," he said, referring to Johnson's video of the back of the second truck.

"The operation was conducted by the Norfolk Southern Railroad Police. CPD assisted with enforcement as necessary," CPD wrote.

Norfolk Southern defended its use of the truck to curb cargo theft.

"In the recent past, individuals broke into parked freight containers in the Chicago area, stealing a range of consumer goods, to include guns and ammunition in transit. Norfolk Southern has the responsibility to ensure the freight we are transporting is safely delivered and does not pose a risk to the communities in which we operate," Terpay said. She said those arrested ranged in age from 21 to 59 years old.

Mckenzie said he was unconvinced by the CPD's contention that it did not assist in planting the trucks.

"I'm really hurt because I fight and try so hard to get young guys in Englewood — to get them respect in the community," he said. "How can we trust CPD if they're doing things like this?"