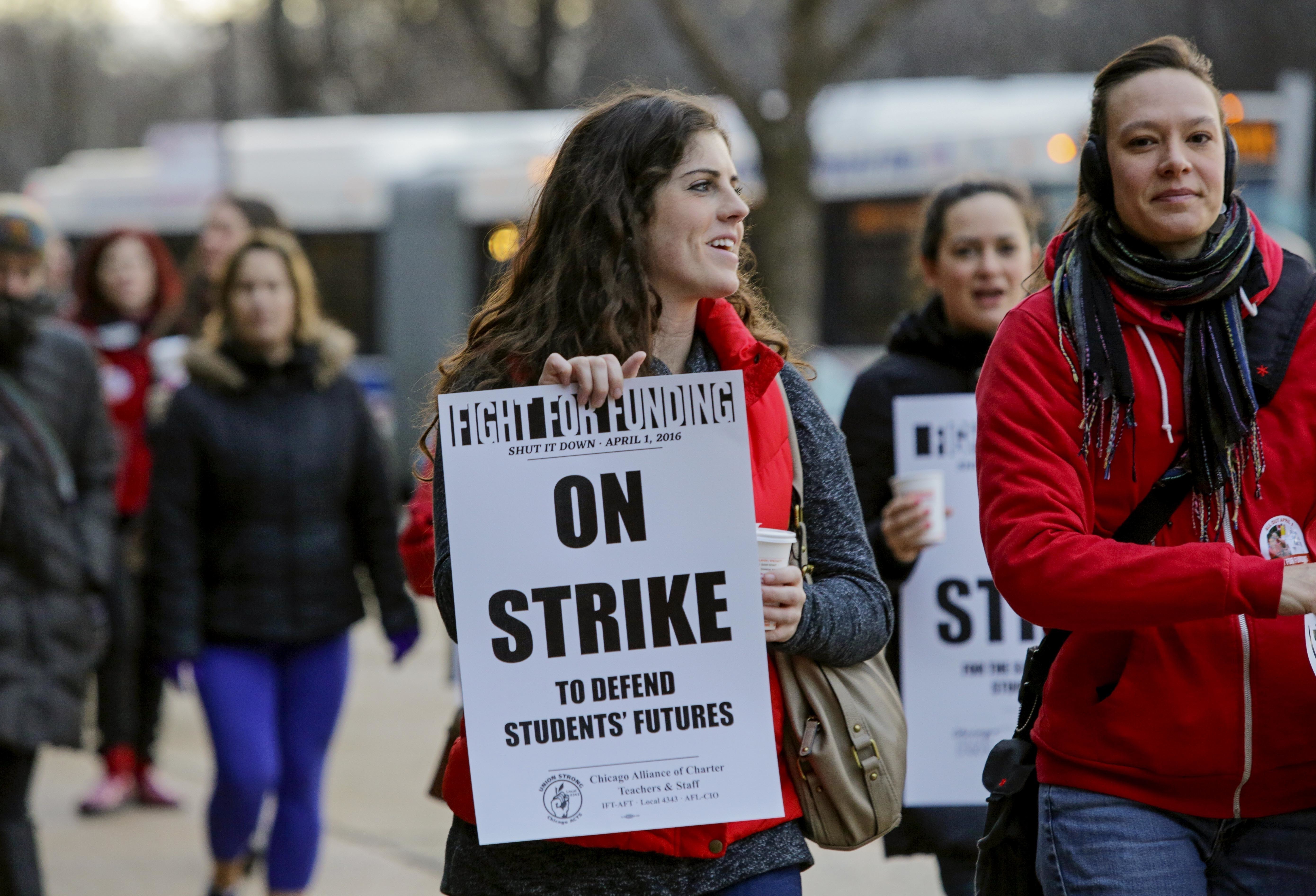 CHICAGO-- Chicago teachers took to picket lines Friday morning in an unprecedented one-day strike they say is aimed at getting lawmakers to adequately fund education and other programs in the nation's third-largest district.

The walkout will close schools for nearly 400,000 students, who will have the option of spending the day at one of the more than 250 "contingency sites" Chicago Public Schools is opening at churches, libraries and school buildings.

"We're going to win funding for our schools and we're going to fight until we get it," Vice President Jesse Sharkey said at a Friday morning news conference outside one school. Behind him teachers and their supporters chanted "Fight for funding!" and waved protest signs.

CBS Chicago's Jeanette Hudson tweeted a photo of Roosevelt High School as the strike got underway:

Gloria Fallon, who has been teaching for 16 years at Beasley Elementary on the city's South Side, was handing out protest signs Friday outside the school. The swimming teacher said there have been days when she's alone with 30 students in the pool. She said that's unsafe.

Fallon says the walkout is teachers' way "to flex our muscles and show we're serious."

Friday's actions also could foreshadow a longer strike over a new labor contract, which by law can't occur for several weeks.

The Chicago Teachers Union last went on strike in 2012, shutting down schools for more than a week before reaching an agreement with Mayor Rahm Emanuel. That contract expired in June, and the two sides have been negotiating for more than a year over a new one.

CPS, which faces a $1.1 billion budget deficit and billions more in pension debt, already has halted salary increases, ordered teachers to take three furlough days and imposed other cuts to schools. It reached an agreement earlier this year with union leadership on a proposal that included salary increases. But a larger union bargaining team rejected it, partly because it required employees to contribute more toward their pensions and health insurance.

The union and its allies say the only way to get a fair contract and improve struggling schools is to pressure lawmakers such as Emanuel and Republican Gov. Bruce Rauner to approve new revenue, either through a tax increase or other changes.

Illinois is about to enter its 10th month without a state budget, and the state's ongoing financial problems have led to severe cuts to social services and education.

While Sharkey acknowledged closing the schools could create difficulties for parents, he said it will be minor compared with the hardship the state will see "if we don't have our public schools."

Schools CEO Forrest Claypool, who calls the action a "wildcat strike," said CPS and the mayor's office share the union's urgency for elected officials to resolve the funding issue. But he said the walkout isn't the answer because it punishes parents and takes a day of instruction away from students.

He also called on state lawmakers to find a solution.

"We need to make it clear that it's time to end the gamesmanship," Claypool said. "When adults play politics, students suffer."

Teachers who participate in Friday's action won't be paid for the day, Claypool said, though he said CPS expects to take legal action against the union. The union says the strike is allowed.

Dozens of unions and community groups will join in Friday's activities, which include rallies at schools and universities across the city. The day will culminate with a rush-hour gathering and march in downtown Chicago, where the union plans to close streets and disrupt traffic.