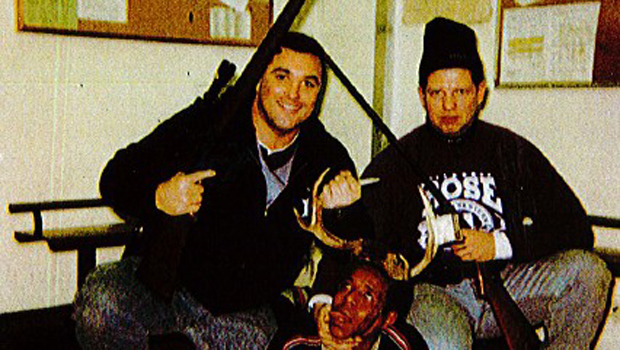 CHICAGO -- A former Chicago police detective is suing to get his job back after being fired for posing in a photograph with another officer holding rifles over an unidentified black man lying on a floor and wearing deer antlers.

The photograph, which is believed to have been taken between 1999 and 2003, recently was made public after detective Timothy McDermott filed a lawsuit in Cook County Circuit Court seeking to rejoin the Chicago Police Department. The photo was discovered during an FBI investigation into police wrongdoing.

The Chicago Police Board fired McDermott in October after finding him guilty of bringing discredit on the department by taking part in the photo, disrespecting or maltreating a person on or off duty, and unlawful or unnecessary use or display of a weapon.

McDermott's lawyer, Dan Herbert, said Wednesday the photograph doesn't tell the entire story. He added there's no evidence the black man was in custody and questioned whether the photo was taken against the man's will.

McDermott posed with Officer Jerome Finnigan, who is serving a 12-year prison sentence for corruption. Both McDermott and Finnigan are white.

The FBI uncovered the photo during its investigation of Finnigan, who was convicted in 2011 of leading a band of rogue police who stole hundreds of thousands of dollars from suspected drug dealers and ordered a hit on a fellow officer to keep him from revealing the scheme.

When asked what took the police board so long to fire McDermott, the mayor declined to comment but said, "Stay tuned," CBS Chicago reports.

The Chicago Sun-Times reported that McDermott told the Police Department's internal affairs division in 2013 that participating in the photo was a mistake.

"I was asked to join the photo and I did so without exercising proper judgment," he was quoted as saying in a transcript. "I made a mistake as a young impressionable police officer who was trying to fit in."