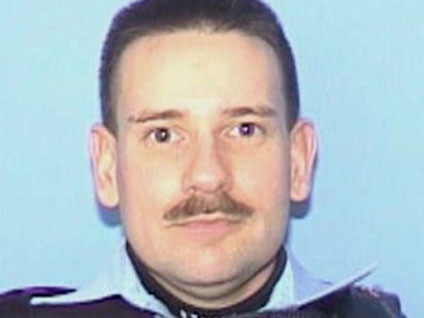 CHICAGO, Ill. (CBS/AP)  Chicago police officer Thor Soderberg was shot and killed with his own weapon in a police parking lot Wednesday afternoon.

Officer Soderberg, 43, who worked one week a month as part of a crime-fighting initiative called Operation Project Youth, was returning to his parked car at the end of his shift when he was approached, say authorities.

The lot was filled with parked police vehicles when a 24-year-old man advanced on Officer Soderberg around 3:48pm, according to CBS affiliate WBBM. The two men became involved in a struggle, with Officer Soderberg ending up disarmed. The suspect then shot him multiple times in the neck and chest, killing him, reported WBBM.

The suspect immediately fled the parking lot with Soderberg's weapon. Police believe he attempted armed robbery a short distance from the killing.  Chicago Police Superintendent James Jackson said, "The offender fired additional shots, which were heard by officers inside the police facility. Several officers quickly responded and there was an exchange of gunfire with the offender."

The suspect was injured by police gunfire and taken to a hospital. His injuries are not expected to be life-threatening, say authorities.

WBBM reported the gunman accused of killing Soderberg has a lengthy rap sheet that includes nearly 20 arrests, including three felonies, 10 misdemeanors and three convictions. The arrests include several drug charges, and even an aggravated assault charge in 2006 for shooting his own brother on July 4.

A friend of the slain officer told WBBM, "You couldn't find a better person to represent the force"..."because he was the epitome of what our police should be in terms of service. He wasn't aggressive. He believed in talking it out, working it out, avoiding confliction and violence. And for this to happen to a person like that, it's just heartbreaking."

Officer Thor Soderberg was an 11-year veteran of the Chicago Police Department and was recently assigned to the Education and Training Division at the police academy. His name will soon be added to a Chicago Police Memorial, honoring officers who have died in the line of duty.