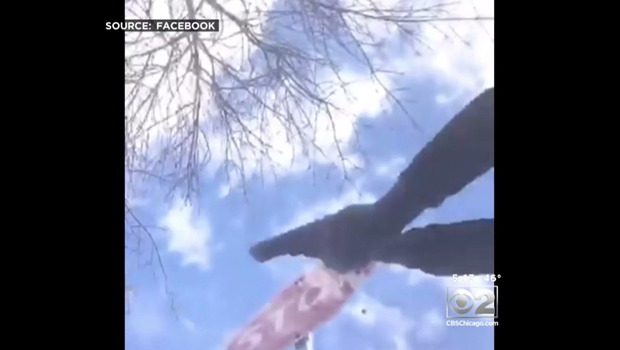 CHICAGO --Chicago investigators have no reason to question the authenticity of a social media posting that seems to show a man taking a selfie video being struck by gunfire, a police spokesman said Friday.

CBS Chicago station WBBM reported the man was streaming the video live on Facebook Thursday afternoon on Chicago's South Side. As he talks into the camera, shots ring out and he falls.

With the phone still recording, an apparent gunman appears, standing overhead. He extends his arms as he fires more than a dozen times.

"We are confident (it) isn't a hoax," Chicago police spokesman Anthony Guglielmi said in a brief statement emailed Friday afternoon.

Police found the video during a now-standard online search following reports of a shooting.

Guglielmi said the 31-year-old victim was hospitalized in critical condition. He added the man was known to police and that detectives were waiting to speak with him.

Investigators were exploring whether the man videoing himself was targeted in retaliation for previous violence, he said. The gunman fled and no suspect is in custody.

There is no indication the man was hit inadvertently or that it was a case of mistaken identity, said Guglielmi, the police department's communications director.

"He was certainly targeted," he said. "We are trying to find out why."

Among the theories investigators are considering is that the shooting might have been in retaliation for taunting rival street-gang members live online. Another possibility is that the man taking the selfie was taunting rivals after straying purposely into another gang's territory, Guglielmi said.

In gang-related shootings, investigators typically search social media sites for clues when a call comes in. In this case, they found the video on Facebook, Guglielmi said.

"More and more of these incidents either originate or escalate from some type of activity that is on a social media platform," Guglielmi said. The term police use for the phenomenon, he said, is 'cyber-banging.'

In the video, the man smiles as he looks into the camera, turns around with the camera focused on him and talks about a small store behind him. Some people can be seen standing on a sidewalk nearby. A few seconds before shooting starts, he says, "I can't be out here without the store being open." He adds, "I need somewhere to duck and hide for cover."

He glances to his right a split second before the first sounds of gunfire.

After about 30 seconds of silence, people can be heard talking about rushing to the hospital. And then a woman is heard crying and screaming, "Oh my God, no! ... I don't believe this!"

"I really do hate that it happened to him because he is a pretty nice kid," Roger Frowner, a resident of the neighborhood who knows the victim, told WBBM.

"It's crazy," Frowner added. "I mean, a person can't stand on the street corner enjoy the sunny day is simply outrageous. It's a shame that people have to watch over their backs. The neighbors in the neighborhood have to duck and lay down on the floors in their own homes."