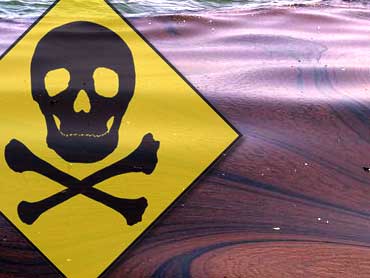 A holding tank at a Caterpillar facility in a Chicago suburb broke Sunday, spilling about 65,000 gallons of oil sludge and contaminating a 3-mile section of the Des Plaines River, officials said.

The substance was reported to be hydraulic and cutting oil, said Maggie Carson, a spokeswoman for the Illinois Emergency Management Agency.

"It is being contained, and there is no evidence of a fish kill or harm to water fowl," Carson said in an e-mail.

Most of the sludge spilled on land, but 6,000 gallons seeped into Des Plaines River water, U.S. Coast Guard Petty Officer William Mitchell said. He said the oil waste poses no risk to human health but could be dangerous to animals in the contaminated area.

The Coast Guard said barge and boat traffic along the river had been stopped.

Caterpillar Inc., the maker of mining and construction machinery, confirmed in a statement Sunday that "an undetermined amount of waste oil" overflowed from a storage area at the company's manufacturing facility.

The company also said it would investigate the incident and "put in place management practices that minimize the potential for future occurrences."

State and federal EPA response teams, as well as teams from Caterpillar, were working with local organizations to contain the spill and clean the area, Carson said.

The Police Department said it hadn't ordered evacuations in the area.