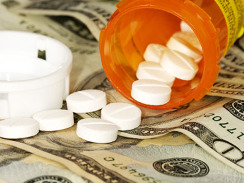 (CBS/AP) COLUMBUS, Ohio - A federal judge in Ohio has sentenced lllinois doctor Paul H. Volkman to four life terms in prison for his conviction in the drug overdose deaths of four patients.

U.S. District Court Judge Sandra Beckwith imposed the sentences Tuesday in Cincinnati, along with sentences ranging from 10 to 20 years on 13 other drug-trafficking related counts.

Federal prosecutors say Volkman dispensed more of the painkiller oxycodone from 2003 to 2005 than any other physician in the country.

"Volkman was the physician at the center of a criminal scheme to distribute millions of controlled substances to hundreds of individuals in exchange for cash - a scheme that brought addiction, diversion and death to southeastern Ohio and beyond," Assistant U.S. Attorneys Tim Oakley and Adam Wright wrote in a sentencing memorandum filed with the court.

In a news release, the US Attorney's Office in southern Ohio said, "Evidence presented during the trial showed that Volkman prescribed and dispensed millions of dosages of various drugs including diazepam, hydrocodone, oxycodone, alprazolam and carisoprodol."

Prosecutors say Volkman made weekly trips from Chicago to three locations in Portsmouth in southern Ohio and one in Chillicothe in central Ohio before federal investigators shut down the operations in 2006.

The 64-year-old Volkman maintains his innocence and had demanded the judge release him immediately.