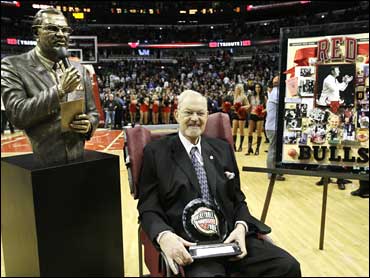 Johnny "Red" Kerr, the former Chicago Bulls coach who spent more than three decades as a broadcaster for the team, died Thursday. He was 76.

Kerr died at his home after a battle with prostate cancer, Bulls spokesman Tim Hallam said.

"His name was synonymous with basketball, both here in Chicago, and throughout the entire NBA," Bulls chairman Jerry Reinsdorf said. "Those that were fortunate enough to have known Johnny were touched by both his tremendous compassion for people, and his lifelong passion for the game of basketball. We will miss him greatly."

Kerr's death is a double blow for the Bulls, following the death also Thursday of Norm Van Lier, one of the most popular players in Bulls history. Van Lier was 61.

The Bulls unveiled a statue of Kerr at the United Center during an emotional ceremony earlier this month that included taped messages from President Barack Obama and commissioner David Stern and speeches from Scottie Pippen and Michael Jordan.

Pippen said Kerr "makes Chicago Bulls basketball what it is," while Jordan called him "an inspiration to me as a basketball player and as a person."

Los Angeles Lakers coach Phil Jackson was informed of Kerr's death during his team's victory over the Phoenix Suns on Thursday night.

"We traveled a lot together over the 11 years I was with the Bulls, nine as the head coach," Jackson said. "It's with a degree of sadness that we remember him. We knew he was failing, but we didn't know it would be this quick."

A Chicago native who served as the team's first head coach and received NBA Coach of the Year honors for leading the Bulls to the playoffs in the inaugural 1966-67 season, Kerr also received a photo collage from Bulls GM John Paxson and the Basketball Hall of Fame's John W. Bunn Lifetime Achievement Award from Jerry Colangelo during the ceremony.

"I want to thank everybody here in the audience who has seen the Bulls play not because of Red Kerr but because of Michael Jordan, Scottie Pippen and all the other people in the organization," said a choked up Kerr.

He is survived by five children and 10 grandchildren.