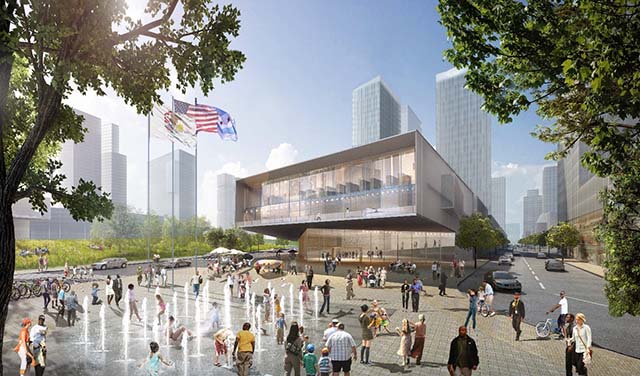 The Barack Obama Foundation, formed by longtime Obama associates, is currently screening two proposals from Chicago and one each from Honolulu and New York. But Chicago's two bids, submitted earlier this month, set off red flags for the foundation's board over land control and university leadership, according to a person close to the foundation.

The foundation is said to be concerned that neither the University of Chicago nor the city owns the property being offered for the presidential library, according to Chicago Mayor Rahm Emanuel's top adviser, David Spielfogel. The land included in the bid is, in fact, owned by the Chicago Park District.

A source close to the foundation told CBS Chicago that there "needed to be a high degree of certainty that if the bid was accepted, the process would be in place for the land to be transferred."

One potential option -- the city could acquire the land from the park district if Chicago is picked for the library and could return the property to the park system if another bid is selected. Spielfogel says the city is considering all options for meeting the foundation's requirements and tight schedule, but he added that the mayor will only consider sites that ensure public land will remain under public control and that the surrounding communities have a say in the process.

CBS Chicago Chief Correspondent Jay Levine reports there is concern about avoiding the same kind of lakefront brawl in the city seeing over the proposed Lucas Museum being built by George Lucas, the creator of "Star Wars." While Emanuel is out of town on vacation, aides are scrambling to work out the same kind of deal the Museum of Science and Industry, the Field Museum, and others have. A Civic Federation fact sheet states that those museums "are independent, nonprofit institutions. They use buildings and land owned by the Chicago Park District free of charge. While they receive funding from the Chicago Park District, they approve their own budgets."

The foundation is also reportedly worried that impending changes in the university leadership at University of Illinois Chicago (UIC) could create uncertainty about that school's competing bid.

The University of Hawaii and Columbia University in New York, the other two schools in contention, both have secured attractive real estate that could house the library. As a result of the concerns about the Chicago bids, news reports have begun to suggest that Columbia may be the strongest contender, with its property and resources. Still, Spielfogel says the mayor is committed to keeping the city's bids competitive in order to bring the Obama library to Chicago.

The University of Chicago's Susan Scher, a former White House official who has been quiet during the much of the process said Tuesday "we have been working closely with city officials and other stakeholders on our dynamic proposal."

University of President Robert A. Easter and President-elect Timothy L. Killeen issued a statement on UIC's bids saying that the university's leadership "remains committed to UIC's proposal, including identified properties and the academic program outlined in the proposal."

It was unclear whether either school's bid was in serious jeopardy or whether, by drawing attention to the issues now, the foundation hoped to spur the universities to act quickly to improve their proposals.

Obama's foundation, in a statement, said it would consider many criteria before choosing the school that offers the best complete package. The University of Illinois said that Obama's foundation "should feel confident in the university leadership's ongoing support," adding that the incoming Illinois governor will fill vacant trustee slots in January. The University of Chicago had no immediate reaction.