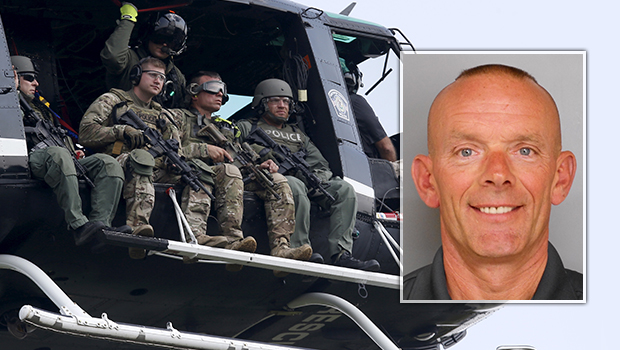 CHICAGO -- A manhunt was underway in far north suburban Fox Lake, after a police officer was shot and killed while chasing three suspects on foot, CBS Chicago reports.

At a late-morning news conference, Lake County Sheriff's Det. Chris Covelli said, around 7:50 a.m., the officer radioed he was pursuing three suspects, after looking into their "suspicious activity." Police lost radio contact with the officer, who was later found with a gunshot wound. Shortly after the news conference, Covelli confirmed that the officer died.

In the afternoon, Covelli identified the officer as Charles Joseph Gliniewicz, a 30-year police veteran who was known as "G.I. Joe."

Fox Lake Mayor Donny Schmidt said the 52-year-old Gliniewicz was a "dear friend" who was married and the father of four boys. He described Gliniewicz as "a decorated police officer, a family man, and a dear friend for the entire village of Fox Lake."

"Understandably, our officers are having a very difficult day," Schmidt said.

Covelli said police were conducting a ground and air search for three suspects -- two white males and a black male. Unconfirmed dispatch reports indicated the suspects might have taken the officer's gun and pepper spray. Police did not provide a more detailed description of the suspects.

People in the area were being told to stay inside, and to report any suspicious activity to 911.

Helicopters were to fly overnight and about 100 officers would be searching in and around Fox Lake for the suspects, Covelli said late Tuesday night.

Grant Community High School in Fox Lake and St. Bede School in neighboring Ingleside were placed on lock down at the request of Fox Lake Police as police searched for the suspects.

Several school districts in the area announced classes Wednesday were canceled because of the search.

The manhunt appeared to be centered on a marshy area off Rainier Way and Rollins Road. Police officers from at least a half dozen different agencies - many heavily armed and wearing body armor - have scattered throughout the area. Several law enforcement vehicles, including armored trucks, were lining U.S. Route 12 in Fox Lake.

K-9 units and helicopters also have been brought in, and according to unconfirmed dispatch reports, picked up a scent in that swampy area.

Less than an hour's drive from Chicago, the area is popular with boaters and for other outdoor pursuits because of its forest preserves and a chain of lakes that partly encircles Fox Lake. Some longtime city dwellers move to the region for what is normally a quieter lifestyle.

The manhunt also has affected trains on the Milwaukee District/North Line, which ends in Fox Lake. At least one train has been stopped due to the police activity, and the Ingleside station has been closed. Passengers on one train from Fox Lake to downtown Chicago will be bused to the Long Lake station.

Service disruptions on the Milwaukee District/North Line were likely until the manhunt ends.

Gliniewicz's death is the third law enforcement fatality in Illinois this year, according to the Law Enforcement Officers Memorial Fund. It says firearms-related deaths in the U.S. are down 13 percent this year compared to the same period last year, Jan. 1. to Sept. 1; there were 30 last year and 26 this year.

Around Fox Lake, residents expressed their own sorrow over the death of the immensely popular Gliniewicz.

"This particular officer is a pillar in my community and definitely going to be missed, and (he) touched so many lives," said Gina Maria, a 40-year-old teacher who lives in the community.