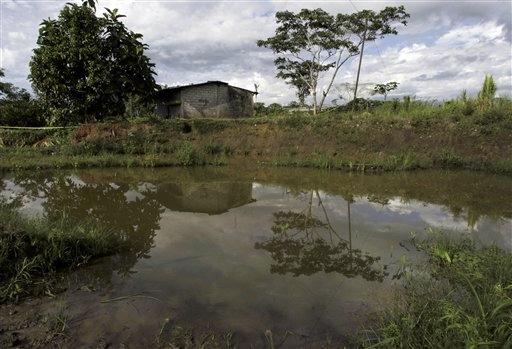 QUITO, Ecuador (AP) - An Ecuadorean judge ruled Monday in an epic environmental case that Chevron Corp. was responsible for oil drilling contamination in a wide swath of Ecuador's northern jungle and ordered the oil giant to pay $9.5 billion in damages and cleanup costs.

The amount - $8.6 billion plus a legally mandated 10 percent reparations fee - was far below the $27.3 billion award recommended by a court-appointed expert but appeared to be the highest damage award ever issued in an environmental lawsuit.

But whether the plaintiffs - including indigenous groups who say their hunting and fishing grounds in Amazon River headwaters were decimated by toxic wastewater that also raised the cancer rate - can collect remains to be seen.

In a statement, Chevron called the decision "illegitimate and unenforceable" and said it would appeal. It has long contended it could never get a fair trial in Ecuador and has removed all assets from this politically volatile Andean country, whose leftist president, Rafael Correa, had voiced support for the plaintiffs.

Chevron, which earned $19.1 billion last year, said it did not believe the judgment "enforceable in any court that observes the rule of law."

Company spokesman Kent Robertson told The Associated Press that "the evidence of fraud on the part of the plaintiffs' lawyers is overwhelming."

"We intend to see that the perpetrators of this fraud are held accounable for their misconduct," he added in an e-mail exchange.

The marathon, high-stakes case, fraught with corporate espionage and geopolitical intrigue, has been winding its way through U.S. and Ecuadorean courts for more than 17 years but has in recent years turned into an unusually acrimonious legal slugfest.

Even Hollywood had a role, with Chevron successfully forcing documentary filmmaker Joe Berlinger to surrender outtakes from his documentary "Crude" about the dispute, a decision upheld by a U.S. appeals court. Those outtakes were used in an attempt to show that a plaintiffs' attorney, Steven Donziger, had both denigrated and unethically influenced Ecuadorean justice.

The plaintiffs' lead lawyer, Pablo Fajardo, called the 187-page judgment "a great step that we have made toward the crystallization of justice" but added that "we are not completely satisfied" with court-specified damage award. The plain-spoken native of the oil patch told The Associated Press that the plaintiffs were discussing whether to appeal.

The suit was originally filed in a New York federal court in 1993 against Texaco and dismissed three years later after the oil company argued that Ecuador was the proper venue to hear the case. Chevron bought Texaco in 2001 and the suit was refiled in Ecuador two years later.

Though it had only 47 named plaintiffs, the suit sought damages on behalf of 30,000 people for environmental contamination and illnesses that allegedly resulted from Texaco's operation of an oil consortium from 1972 to 1990 in a Rhode Island-sized oil patch dug out of virgin rain forest.

Monday's ruling was hailed by the environmentalist groups Amazon Watch and Rainforest Action Network as "proving overwhelmingly that the oil giant is responsible for billions gallons of highly toxic waste sludge deliberately dumped into local streams and rivers, which thousands depend on for drinking, bathing, and fishing."

"It is time Chevron clean up its disastrous mess in Ecuador," they said in a joint statement.

A local indigenous leader, Guillermo Grefa of the Kichwa people, was quoted by the plaintiffs as saying "we can now tell our neighbors and those affected that justice exists. They can now dream of drinking clean water that doesn't have petroleum residues like what we've had to drink up until now."

Chevron invested tens of millions of dollars in its legal defense as well as counterattacks against the plaintiffs and Ecuadorean officials. It has long argued that a 1998 agreement Texaco signed with Ecuador after a $40 million cleanup absolves it of any liability in the case. The plaintiffs say the cleanup was a sham and didn't exempt third-party claims.

Chevron sought relief in a half-dozen U.S. federal courts and requested binding arbitration in an international tribunal in the Netherlands.

The oil company even used corporate spies to clandestinely videotape meetings with Ecuadorean officials in which the men posed as contractors seeking oil contamination cleanup contracts. The two even tried to coax the trial judge - who later resigned as a result - into saying he expected to rule against Chevron. One of the men turned out to be a convicted drug trafficker.

Just last week, U.S. federal judge Lewis A. Kaplan in New York took the unusual step at Chevron's request of pre-emptively blocking any judgment for at least 28 days after concluding that attempts to collect assets could seriously disrupt the business of a company vital to the global economy.

Issued by Judge Nicolas Zambrano from a ramshackle courthouse in the provincial city of Lago Agrio, Monday's ruling gives Chevron 60 days to set up an escrow account in Ecuador through which the damages would be distributed.

If upheld and enforced, the award would substantially exceed the $5 billion originally awarded to victims of the 1989 Exxon Valdez oil spill in Alaska's Prince William sound. That jury award was later cut down to $507.5 million by the U.S. Supreme Court. Other major environmental damage payments include the $470 million paid by Union Carbide in 1989 to India's government for the lethal gas leak five years earlier in Bhopal that killed an estimated 15,000 people.

BP set up a $20 billion oil spill compensation fund after last year's massive Gulf of Mexico oil spill, of which about $3.4 billion has been paid out.

The balance is earmarked for recovering native plant species, water distribution systems and repairing cultural damage. In addition, Fajardo confirmed to the AP late Monday, the law specifies that Chevron must pay 10 percent of the judgement as reparations.

A professor at Loyola Law School in Los Angeles who has studied the case, Georgene Vairo, said the comparatively small judgment is a signal from Ecuador that it is willing to negotiate a smaller fine.

"This is way low compared with what everyone was expecting to happen," she said. "They are trying to show the world they are reasonable people. This is Ecuador coming to the table."

Fajardo called on Chevron in a statement issued later Monday to comply with the ruling and halt its "campaign of warfare against the Ecuadorean courts and the impoverished victims of its unfortunate practices."

"We believe the evidence before the court deserves international respect and the plaintiffs will take whatever actions are appropriate consistent with the law to press the claims to a final conclusion," he added.

Among actions taken by Chevron against the plaintiffs is a civil suit it filed in New York on Feb. 1 against Donziger and other plaintiffs' lawyers claiming they confected the contamination suit and accusing them of extortion and racketeering.

The San Ramon, California-based company has long contended that the court-appointed expert in the case was unduly influenced by the plaintiffs. In a statement Monday, it called Zambrano's ruling "the product of fraud (and) contrary to the legitimate scientific evidence."

Robertson, the company spokesman, said Chevron had presented evidence in various U.S. courts showing that the plaintiffs' attorneys and consultants had ghostwritten the court-appointed expert's report that recommended $27.3 billion in damages.

"The legitimate scientific evidence provided to the court, as well as scientific analysis performed by the government of Ecuador, proves Texaco's cleanup worked," he contended Monday.

Chevron contends that Texaco's former partner in the consortium, state oil company Petroecuador, kept polluting after Texaco pulled out. It disputes the findings of the expert, geological engineer Richard Cabrera, who concluded that Texaco left a mess when it departed in the early 1990s.

Chevron disputed all those findings, and Wall Street analyst Fadel Gheit of Oppenheimer & Co. told the AP in New York that he did not believe the plaintiffs would be able to collect.

"They think Chevron's a cash cow, so they thought they could get something, but it's not going to happen. If so, it would be unprecedented. Companies like Chevron have been accused of polluting for decades" without being forced to pay, he told the AP.