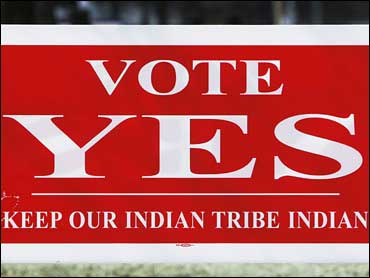 Cherokee Nation members have voted to revoke the tribal citizenship of an estimated 2,800 descendants of the people the Cherokee Indians once owned as slaves.

With all 32 precincts reporting, 76.6 percent had voted in favor of an amendment to the tribal constitution that would limit citizenship to descendants of "by blood" tribe members as listed on the federal Dawes Commission's rolls from more than 100 years ago.

The commission, set up by a Congress bent on breaking up Indians' collective lands and parceling them out to tribal citizens, drew up two rolls, one listing Cherokees by blood and the other listing freedmen, a roll of blacks regardless of whether they had Indian blood.

Some opponents of the ballot question argued that attempts to remove freedmen from the tribe were motivated by racism.

"I'm very disappointed that people bought into a lot of rhetoric and falsehoods by tribal leaders," said Marilyn Vann, president of the Oklahoma City-based Descendants of Freedmen of Five Civilized Tribes.

Tribal officials said Saturday's vote was a matter of self-determination.

"The Cherokee people exercised the most basic democratic right, the right to vote," tribal Principal Chief Chad Smith said. "Their voice is clear as to who should be citizens of the Cherokee Nation. No one else has the right to make that determination."

Smith said turnout — more than 8,700 — was higher than turnout for the tribal vote on the Cherokee Nation constitution four years ago.

"On lots of issues, when they go to identity, they become things that people pay attention to," Smith said.

The petition drive for the ballot measure followed a March 2006 ruling by the Cherokee Nation Supreme Court that said an 1866 treaty assured freedmen descendants of tribal citizenship. Since then, more than 2,000 freedmen descendants have enrolled as citizens of the tribe.

Court challenges by freedmen descendants seeking to stop the election were denied, but a federal judge left open the possibility that the case could be refiled if Cherokees voted to lift their membership rights.