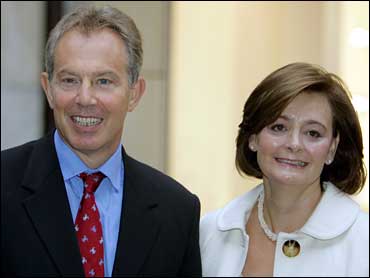 Cherie Blair has signed a book deal to write about her life as a leading British human rights lawyer and the wife of former Prime Minister Tony Blair, her publisher said Wednesday.

Cherie Blair's autobiography will be published in October 2008, Little, Brown Book Group said in a statement. The publisher would not discuss the terms of the deal for the book's international publishing rights.

Her memoirs will likely come out before her husband's much-anticipated memoir, which a Blair representative said last month was years away from publication with no book deal yet.

Cherie Blair's publisher said her book would be a "warm, intimate and often very funny portrait of a family living in extraordinary circumstances."

But British political observers will likely be watching for anything she says about the Blairs' reputedly stormy relationship with Tony Blair's successor, Prime Minister Gordon Brown.

Cherie Blair, who will be 52 on Sept. 23, is known for being gaffe-prone; her unguarded comments on both international and internal politics have caused trouble. But she is also a respected lawyer.

As a Queen's Counsel, she is recognized as one of Britain's leading human rights lawyers. She has taken on landmark cases that sometimes brought her into conflict with her husband's government.

She fought unsuccessfully last year in Britain's highest court for a high school student's right to wear a body-covering Muslim gown. She also insisted last year that torture was never acceptable and evidence obtained through torture should be inadmissible in court. She spoke after her husband's government was accused of failing to act on the U.S. prison at Guantanamo Bay and the U.S. practice of "extraordinary rendition," the transfer of terror suspects to countries where they may be tortured.

A year ago, when Brown said in a speech that it had been a privilege to have worked with Tony Blair, a journalist reported hearing Cherie say: "Well, that's a lie."

She denied saying it, but Britain's leading newspapers repeated her purported remark.

The book will begin with her childhood as the daughter of actor Tony Booth, who walked out on his family when she was a child, and will describe life with a young family in 10 Downing Street.

"I feel so privileged to have traveled so far. So much has happened -- things that my grandma could never have dreamt of -- that it feels wrong somehow just to let it pass as if the journey had no meaning," she said in her publisher's statement.

She previously co-authored a book in 2004 with Cate Haste, "The Goldfish Bowl: Married to the Prime Minister, 1955-1997," about how the spouses of previous prime ministers coped with public life.
By D'Arcy Doran