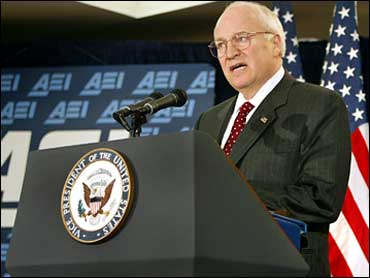 The report says a public official's unexercised stock options and deferred salary fall within the definition of "retained ties" to his former company.

Cheney said Sunday on NBC that since becoming vice president, "I've severed all my ties with the company, gotten rid of all my financial interest. I have no financial interest in Halliburton of any kind and haven't had, now, for over three years."

Democrats pointed out that Cheney receives deferred compensation from Halliburton under an arrangement he made in 1998, and also retains stock options. He has pledged to give after-tax proceeds of the stock options to charity.

Cheney's aides defended the assertion on NBC, saying the financial arrangements do not constitute a tie to the company's business performance. They pointed out that Cheney took out a $15,000 insurance policy so he would collect the deferred payments over five years whether or not Halliburton remains in business.

Lautenberg, D-N.J., asked the Congressional Research Service to weigh in.
Without naming Cheney or Halliburton, the service reported that unexercised stock options and deferred salary "are among those benefits described by the Office of Government Ethics as 'retained ties' or 'linkages' to one's former employer."

Lautenberg said the report makes clear that Cheney does still have financial ties to Halliburton. "I ask the vice president to stop dodging the issue with legalese," Lautenberg said.

Cathie Martin, Cheney's spokeswoman, said the question is whether Cheney has any possible conflict of interest with Halliburton, "and the answer to that is, no."

Cheney was chief executive officer of Halliburton from 1995 through August 2000. The company's KBR subsidiary is the main government contractor working to restore Iraq's oil industry in an open-ended contract that was awarded without competitive bidding.

According to Cheney's 2001 financial disclosure report, the vice president's Halliburton benefits include three batches of stock options comprising 433,333 shares. He also has a 401(k) retirement account valued at between $1,001 and $15,000 dollars.

Earlier this month, a federal judge dismissed a lawsuit that accused Halliburton and Cheney of misleading investors by changing the way the company counted revenue from construction projects.

The lawsuit was filed last year by Judicial Watch, a conservative public interest group, on behalf of three small investors, who said the company tried to polish financial results by booking revenue on cost overruns before it was certain of getting paid.

Halliburton has contracts worth more than $1.7 billion for its work in Iraq, and it could make hundreds of millions more from a no-bid contract it was awarded by the Army Corps of Engineers, The Washington Post has reported.