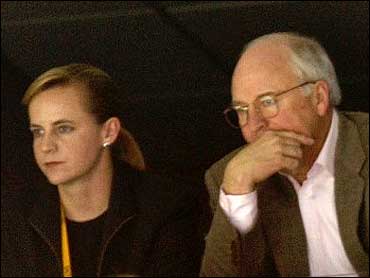 Cheney, a top aide during her father's campaigns in 2000 and 2004, has drawn much political attention because she is openly gay. Her memoir is the first acquisition for Mary Matalin's publishing subdivision, Threshold.

Matalin, a Republican pundit and strategist, said the book would give Cheney a chance to give her own thoughts on the issue — something she couldn't do while working on the campaigns.

"All the Cheneys are great writers, and she's no exception," Matalin told The Associated Press on Tuesday. "What I have seen on paper so far is great."

"The first time I campaigned with my father, I was 8 years old," Cheney said in news release issued by Simon & Schuster. "I've been involved with campaigns as a family member, a staffer and, though I certainly never intended it, as a political target for the other side."

During the 2004 campaign, Democratic presidential candidate John Kerry mentioned Cheney's sexuality when asked during a debate with President George W. Bush whether homosexuality is determined at birth.

The vice president and his wife, Lynne Cheney, accused Kerry of using their daughter for political gain. Lynne Cheney said Kerry's statements amounted to a "cheap and tawdry political trick."

Cheney chose Simon & Schuster in part because she is a longtime friend and colleague of Matalin, according to her lawyer, Robert Barnett.

Matalin also is known as the wife and political sparring partner of Democratic consultant James Carville.