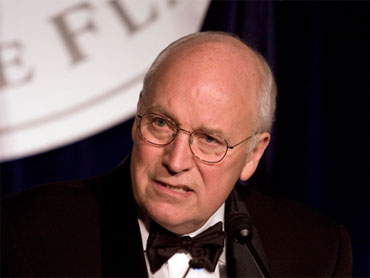 Former Vice President Dick Cheney on Wednesday night accused the White House of dithering over the strategy for the war in Afghanistan and urged President Barack Obama to "do what it takes to win."

"Make no mistake. Signals of indecision out of Washington hurt our allies and embolden our adversaries," Cheney said while accepting an award from a conservative national security group, the Center for Security Policy.

Cheney disputed remarks by White House chief of staff Rahm Emanuel that the Bush administration had been adrift concerning the war in Afghanistan and that the Obama administration had to start from the beginning to develop a strategy for the 8-year-old war.

To the contrary, Cheney said, the Bush administration undertook its own review of the war before leaving office and presented its findings to Obama's transition team.

"They asked us not to announce our findings publicly, and we agreed, giving them the benefit of our work and the benefit of the doubt," Cheney said. The strategy Obama announced in March bore a "striking resemblance" to what the Bush administration review had found, the vice president said.

Emanuel told CNN on Sunday that the decision regarding what to do in Afghanistan is more complex than whether to send more troops. The U.S. commander there, Gen. Stanley McChrystal, has reportedly asked for as many as 40,000 additional troops to combat the Taliban insurgency and al-Qaida fighters.

"When you go through all the analysis, it's clear that basically we had a war for eight years that was going on, that's adrift, that we're beginning at scratch, and just from the starting point, after eight years," Emanuel said.

Emanuel on CBS' "Face the Nation"

Cheney said the Obama administration seems to be pulling back and blaming others for its own failure to implement the strategy it had embraced earlier in the year.

"The White House must stop dithering while America's armed forces are in danger," the former vice president said. "It's time for President Obama to do what it takes to win a war he has repeatedly and rightly called a war of necessity."

Cheney criticized Obama's decision to drop plans begun in the Bush administration for missile defense interceptors in Poland and a radar site in the Czech Republic, calling the move "a strategic blunder and a breach of good faith." The administration said it will instead pursue a higher-tech system that is also more cost-effective.

"Our Polish and Czech friends are entitled to wonder how strategic plans and promises years in the making could be dissolved just like that with apparently little if any consultation," he said. "President Obama's cancellation of America's agreements with the Polish and Czech governments is a serious blow to the hopes and aspirations of millions of Europeans."

Cheney said those who try to placate Russian Prime Minister Vladimir Putin and accede to his wishes will get nothing in return but trouble.