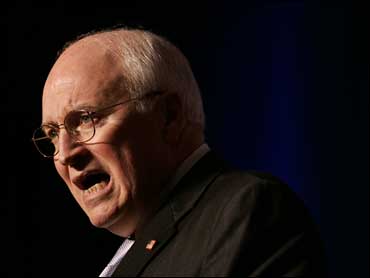 The debate over waterboarding flared Thursday on Capitol Hill, with the CIA director raising doubts about whether it's currently legal and the attorney general refusing to investigate U.S. interrogators who have used the technique on terror detainees.

Vice President Dick Cheney, meanwhile, said "it's a good thing" that top al Qaeda figures underwent the harsh interrogation tactic in 2002 and 2003, claiming they were forced to give up information that helped protect the country and saved "thousands" of American lives.

Since the Sept. 11, 2001, terror attacks, President Bush has "made the right decisions for the right reasons," Cheney said.

"I've been proud to stand by him, the decisions he made. And would I support those same decisions today? You're damn right I would," he said to enthusiastic applause at the Conservative Political Action Conference. [See expanded remarks below.]

Waterboarding involves strapping a person down and pouring water over his or her cloth-covered face to create the sensation of drowning. It is condemned by nations around the world; critics, including U.S. military interrogators, call it a form of torture.

Why millions of unemployed Americans just got their tax refund

Despite U.S. and international laws which recognize waterboarding as torture - a technique which dates back at least to the Spanish Inquisition, and for which U.S. courts have obtained convictions as a war crime - CIA Director Michael Hayden said the use of waterboarding by the U.S. was legal in 2002 and 2003 because a Justice Department lawyer signed a secret legal opinion claiming terror detainees were not protected by the Geneva Convention's ban on torture.

When that opinion was rescinded after it became public in 2004, other secret opinions were written declaring extreme intrerrogation methods could be approved by the president.

Such authorizations were at odds with public statements by President Bush and then-Attorney General Alberto Gonzales who declared torture to be "abhorrent" and which indicated that the waterboarding of detainees was not allowed by the U.S.

During 2002-2003, the administration said this week, waterboarding was in fact authorized for use on three detainees - accused al Qaeda members Khalid Sheikh Mohammed, Abu Zubaydah and Abd al-Rahim al-Nashiri - because of widespread belief among U.S. intelligence officials that catastrophic attacks by al Qaeda were imminent.

Even after the Supreme Court ruled in 2006 that al Qaeda prisoners were subject to Geneva Convention protections, the president in July signed an executive order approving "enhanced" interrogation techniques on certain prisoners. As revealed in The New York Times, the order, approved by the White House Office of Legal Counsel (OLC), authorizes the CIA to use such techniques banned by international law.

Under the provisions of the secret order, waterboarding could only be authorized by the president.

Intelligence experts have not only denounced the use of waterboarding, saying that intelligence obtained through that method is questionable, but have allowed that its use exposes those who authorize it to indictment on charges of war crimes.

[As a side note, Senate Majority Leader Harry Reid said this week that the president is demanding that Steven Bradbury, who signed off on secret legal opinions allowing the use of waterboarding, be appointed to the head of the Office of Legal Counsel, a post which requires Senate confirmation.

Reid charges the president with purposely holding up more than 84 post nominations for federal agencies and judgeships, refusing to move forward on them unless the Senate OKs Bradbury. Meanwhile, the president blamed Congress for holding up the nominations, without mentioning Bradbury, whose duties at OLC (according to a former OLC head) could include writing an "advance pardon" excusing lawbreaking by the Executive Branch.]

CIA: Waterboarding Not In The Current Program

In 2006, the Central Intelligence Agency banned waterboarding by its personnel in the wake of a Supreme Court decision and new laws on the treatment of U.S. detainees.

"It is not included in the current program, and in my own view, the view of my lawyers and the Department of Justice, it is not certain that that technique would be considered to be lawful under current statute," Hayden told the House Intelligence Committee.

But White House spokesman Tony Fratto admitted Thursday that while waterboarding is not currently used, its legal use could be approved by the president if the attorney general and intelligence heads said it would garner important intelligence.

"I'm not in a position, and no one is in a position, to rule anything in or out," Fratto said, when asked if torture might be used, despite current law.

On Thursday, Attorney General Michael Mukasey pushed back against Democrats on the House Judiciary Committee demanding to know whether he would prosecute U.S. interrogators who used waterboarding in the past.

"Are you ready to start a criminal investigation into whether this confirmed use of waterboarding by U.S. agents was illegal?" the committee's chairman, Rep. John Conyers, D-Mich., asked, calling the technique an "odious practice."

"No, I am not," Mukasey answered bluntly.

He said the Justice Department could not investigate or prosecute people for actions that it had authorized earlier.

Mukasey has refused to say publicly whether he considers waterboarding legal. On Thursday he said it "was found to be permissible under the law as it existed" in the years immediately following 9/11.

Critics say waterboarding violates the U.N. Convention Against Torture and U.S. laws outlining legal treatment of detainees. The Justice Department long has resisted exposing the Bush administration and its employees to criminal or civil charges or even international war crimes if waterboarding were declared illegal.

"Everyone in the world knows that waterboarding is torture and illegal," Cox said. "The U.S. government admits having done it. Yet the highest law enforcement official in the land refuses to investigate this scandal."

Stepping up to defend the White House's position that it has the authority to OK waterboarding, the House Judiciary Committee's top Republican, Rep. Lamar Smith of Texas, said he hoped the "administration will not be defensive about using some admittedly harsh but non-lethal interrogation techniques."

"Would you agree with me that 99 percent of the American people would probably endorse such techniques if they would be shown to save thousands of American lives and were conducted only on terrorists?" Smith asked Mukasey.

"I can't sit here and say what I think 99 percent of people would do," Mukasey answered.

Former military and intelligence officials who have spoken out against waterboarding say the refusal by the United States to outlaw the technique could prompt terrorists or enemy nations to use it on U.S. personnel who may be detained in the future.

"Under what circumstances would it ever be permissible under international law for a foreign nation to interrogate a U.S. citizen by strapping a U.S. citizen to a board and suffocating him or her with water with the intent to create the fear of death?" Rep. Hank Johnson, D-Ga., asked Mukasey.

The attorney general, who earlier refused to say whether he considers the rack or thumbscrews forms of torture, said he would not answer a hypothetical situation.

"Because to do so would indicate the contours of what may or may not be permitted under a program that is classified," he said.

"The military has interrogated terrorists held at Guantanamo Bay. And in addition, a small number of terrorists, high-value targets, held overseas have gone through an interrogation program run by the CIA. It's a tougher program, for tougher customers. These include Khalid Sheikh Mohammed, the mastermind of 9/11. He and others were questioned at a time when another attack on this country was believed to be imminent. It's a good thing we had them in custody, and it's a good thing we found out what they knew.

"The procedures of the CIA program are designed to be safe, and they are in full compliance with the nation's laws and treaty obligations. They've been carefully reviewed by the Department of Justice, and very carefully monitored. The program is run by highly trained professionals who understand their obligations under the law. And the program has uncovered a wealth of information that has foiled attacks against the United States; information that has saved thousands of lives.

"The United States is a country that takes human rights seriously. We do not torture - it's against our laws and against our values. We're proud of our country and what it stands for. We expect all of those who serve America to conduct themselves with honor. And we enforce those rules. Some years ago, when abuses were committed at Abu Ghraib prison, a facility that had nothing to do with the CIA program, the abuses that came to light were, in fact, investigated, and those responsible were prosecuted. …

"From the very morning our nation was attacked on 9/11, the President of the United States has had to make some immensely enormous decisions. Every day he faces responsibilities that others would pale before. I've been there with him. I've seen him make the tough calls, and then weather the criticism and take the hits. President Bush has been tough and courageous. He's made the right decisions for the right reasons, and he always reflects the best values of the American people. I've been proud to stand by him and by the decisions he's made. And I would support those same - and would I support those same decisions again today? You're damn right I would."