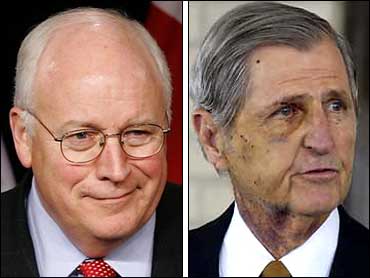 Vice President Dick Cheney on Wednesday defended his decision not to publicly disclose the shooting of a fellow hunter until the following day. Accepting full blame for the accident, he called it "one of the worst days of my life."

"I'm the guy who pulled the trigger that fired the round that hit Harry," Cheney told Fox News Channel, referring to 78-year-old Harry Whittington, who has been hospitalized since the accident.

It was Cheney's first public comments since the shooting Saturday in south Texas.

Cheney has been roundly criticized for failing to tell the public about the accident until the next day. He said he thought it made sense to let the owner of the ranch where it happened reveal the accident on the local newspaper's Web site Sunday morning.
"I thought that was the right call," Cheney said. "I still do."

Cheney said he agreed that ranch owner Katharine Armstrong should make the story public because she was an eyewitness, because she grew up on the ranch and because she is "an acknowledged expert in all of this" as a past head of the Texas Parks and Wildlife Department. He also agreed with her decision to choose the local newspaper as the way to get the news out.

"I thought that made good sense because you can get as accurate a story as possible from somebody who knew and understood hunting and then it would immediately go up to the wires and be posted on the Web site, which is the way it went out and I thought that was the right call," Cheney said.

"What do you think now?" he was asked.

"I still do," Cheney responded. "The accuracy was enormously important. I had no press person with me."

A source close to the administration told CBS News correspondent Gloria Borger that people within the White House are livid and that signals are being sent to the vice president's office that the issue has been handled poorly.

Other Republicans defended the vice president. Appearing on CBS News' The Early Show, GOP strategist Bay Buchanan said Cheney was under no obligation to inform the national press about what happened.

"He did everything correct," Buchanan said. "They feel that they have a right to all information about his life, and they simply do not."

She added, "This was a hunting accident. He reported it to authorities immediately and investigation followed."

Cheney described seeing Whittington fall to the ground after he pulled the trigger while aiming at a covey of quail.

"The image of him falling is something I'll never ever be able to get out of my mind," Cheney said. "I fired, and there's Harry falling. It was, I'd have to say, one of the worst days of my life at that moment."

"You can talk about all of the other conditions that exist at the time but that's the bottom line and — it was not Harry's fault," he said. "You can't blame anybody else. I'm the guy who pulled the trigger and shot my friend."

Texas officials said the shooting was an accident and no charges have been brought against the vice president.

A report issued by the Texas Parks and Wildlife Department on Monday said Whittington was retrieving a downed bird and stepped out of the hunting line he was sharing with Cheney.

"Another covey was flushed and Cheney swung on a bird and fired, striking Whittington in the face, neck and chest at approximately 30 yards," the report said.

Cheney said he fortunately always has a medical team with him, and members of that team responded to Whittington immediately after the accident.

"I ran over to him," Cheney said. "He was laying there on his back, obviously, bleeding. You could see where the shot struck him."

He said he has no idea if he hit a bird because he was completely focused on Whittington.

"I said, `Harry, I had no idea you were there.' He didn't respond," Cheney said.

Whittington was reported doing well at a Texas hospital Wednesday after doctors said that a pellet entered his heart and that he had what they called "a mild heart attack."

One pellet from Cheney's shotgun — just under one-tenth of an inch in diameter — traveled to Whittington's heart. Hospital officials said the Texan had a normal heart rhythm again Wednesday afternoon and was sitting up in a chair, eating regular food and planning to do some legal work in his room.

"He's doing extremely well right now," Banko said. His doctors have said they are highly optimistic about his recovery.

"He still kind of wonders what all the hoopla is about," Banko said. He said Whittington sees it as "much ado about nothing."

Cheney was using No. 7½ shot from a 28-gauge shotgun. Shotgun pellets typically are made of steel or lead; the pellets in No. 7½ shot are just under one-tenth of an inch in diameter.

The pellet that traveled to Whittington's heart was either touching or embedded in the heart muscle near the top chambers, called the atria, officials said.

It caused inflammation that pushed on the heart in a way that temporarily blocked blood flow — what the doctors called a "silent heart attack." This is not a traditional heart attack in which an artery is blocked, and doctors said that Whittington's arteries were healthy. The invading pellet also irritated the atria and caused an irregular heartbeat.