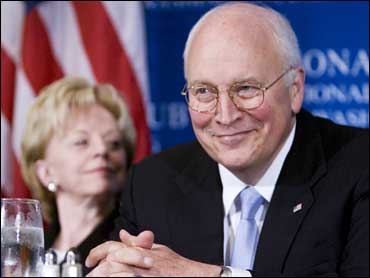 Talking about his family roots and how he's distantly related to Democratic presidential candidate Barack Obama, the vice president noted that he had Cheneys on both sides of his family.

"And we don't even live in West Virginia," Cheney quipped.

"You can say those things when you're not running for re-election."

"I truly cannot believe that any vice president of the United States, regardless of their political affiliation, would make such a derogatory statement about my state or any state for that matter," he said.

On Capitol Hill, Cheney's comment was denounced by both Democrats and Republicans.

"This is exactly the type of stereotyping that we don't need from our elected officials," said Rep. Shelley Moore Capito, R-W.Va. "It's disrespectful, and it's certainly not funny. ... As a proud state, I can say we are disappointed."

Sen. Robert Byrd, D-W.Va., blasted Cheney, saying that for a vice president to openly display "such contempt and astounding ignorance toward his own countrymen" was an insult to all Americans.

"Now that he or the administration he represents no longer needs their vote, Mr. Cheney apparently feels that he is now free to mock and belittle the people of West Virginia," Byrd said.

Byrd, a Senate fixture at the age of 90, was hospitalized later Monday at his doctor's urging after suffering from lethargy and sluggishness at the Capitol and, later, at his home, a spokesman for the 90-year-old Democrat said.

"The vice president's offhand comment was not meant to hurt anyone," Cheney spokeswoman Lea Anne McBride said later Monday. "On reflection, he concluded that it was an inappropriate attempt at humor that he should not have made. The vice president apologizes to the people of West Virginia for the inappropriate remark."

In a question-and-answer session after giving a speech at the National Press Club, Cheney said also joked that he wouldn't object to a family reunion with Obama, but said he didn't think the candidate would be up for one - "at least not before November."

"He'd probably be fearful I might whisper in his ear and change his whole view of the Middle East," Cheney said.

He said that when his wife, Lynne, was doing research on a book, she discovered that his grandmother was descended from a man named Richard Cheney. "So I had Cheneys on both sides of the family," he said.