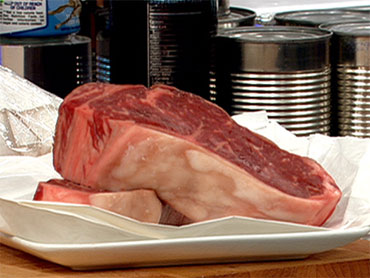 It used to be that diets meant cutting down on the fat and calories, more exercise, more fish in the diet, more fruits and vegetables. That was a healthy diet 50 years ago.

Has human anatomy changed? No, but food has changed a lot. Foods that were healthy 50 years ago may not necessarily be healthy in 2010.

Today, according to Stephen Perrine, author of "New American Diet," we have all sorts of chemicals in our foods, pesticides, growth hormones, antibiotics, and plastic pollutants, to name a few. He says they aren't good for the environment, they aren't good for our bodies, and they also cause you to be overweight.

Perrine says certain toxins in your food can contribute to weight issues and obesity. The chemicals that disrupt the function of our hormonal system are called obesogens. Obesogens can cause heart disease, diabetes, obesity, and high cholesterol. These chemicals are found in many of the most popular foods we eat and enter our body through a variety of sources: natural compounds found in soy products, artificial hormones fed to the animals we consume, plastic pollutants in some food packaging, chemicals added to processed foods, and pesticides sprayed on our produce.

Perrine told "Early Show" co-anchor Harry Smith that only recently the American Medical Association has come out in support of the idea that these obesogens play a significant role in our national obesity crisis.

Perrine's book, "New American Diet," addresses this correlation, and gives guidelines on how you can change your diet to eliminate obesogens. In interviewing test subjects who tried the New American Diet, Perrine said, people reported an average weight loss of 15 pounds over two weeks.

But where can we find these obesogens? What are some foods that are the worst offenders? Perrine took a look at some basic obesogens and examined where they can be found in foods:

Where do you find "obesogens"?

NOTE: We produce six billion pounds of the obesogen BPA every year and it's detectable in 93 percent of Americans.

PLASTIC POLLUTANTS:
Detectable in 75 percent of Americans, phthalates are plastic softeners that mimic estrogen. They're found in the lining of canned foods and beverages, sports drink bottles, and pesticides. We create about one billion pounds of phthalates a year worldwide, and they leach easily into our blood, urine, saliva, etc. We produce six billion pounds of the obesogen BPA (bisphenol A, an organic compound used to make plastic) every year, and it's detectable in 93 percent of Americans. BPA leaching occurs from food and drink packaging, cans, and bottle tops.

TAKE TUNA FOR EXAMPLE:
Canned tuna is one of the most BPA-heavy foods out there. BPA is an ingredient in the lining of cans that leaches into foods and interferes with the hormones that tell your body when it's full. In fact, if you empty out a can of tuna, wash it out and run your finger along the side, you can feel the plastics. Those can be really dangerous for someone on a diet. The easiest fix is simply swapping out canned tuna for tuna pouches.

ARTIFICAL HORMONES:
A study in the International Journal of Obesity from researchers at 10 different universities, including Yale University School of Medicine and Johns Hopkins Unversity, found that the use of steroid hormones in meat production and on conventional dairy farms could be a possible contributor to the obesity epidemic.

Consumption of meat from cattle treated with hormones, means you are taking them in, too. Naturally-occurring horomones, such as estrogen, progesterone and testosterone are being pumped into our cattle. In addition, trenbolone acetate or TBA is also givent to cattle to "beef them up." TBA is an anabolic steroid that's eight to 10 times as potent as testosterone. That means if your cattle has it, your meat has it, and you then have it.

Also, when you are picking meats, keep this in mind: A lot of obesogens are fat soluable, so they accumulate in fatty tissues. So pick leaner cuts if you can, 95 percent lean beef for example. But the best advice is to go organic, free range, grass-fed beef. Check the labels, as there are several grades of organic foods.

LET'S TAKE A LOOK AT STEAK:
Because conventionally-raised beef are fed corn and soy (an obesogen) and injected with six different steroids (all obesogens), the typical conventional steak has seven and a half times as much fat as a steak normally should have.

Those obesogens -- and the fat they create -- go into your body when you eat the steak. But order a grass-fed steak, and you'll avoid all that fat and those obesogens.

ANTIBIOTICS/SOY-FED:
Antibiotics are often given to chicken and fish to promote growth and keep them healthy, as they are often kept in tight pens with one another. Antibiotics are an obesogen. As is soy, and soy is a great protein-rich way to feed chickens, beef and fish cheaply, but it's not what these animals were bred to eat. This means they need more antibiotics to keep healthy.

TAKE A LOOK AT SALMON:
Because farmed salmon are fed a mix of soy (an obesogen) and fish meal, their flesh is naturally white, not pink. And because they are farmed in enclosed pens, they are fed antibiotics (an obesogen) as well. To create that healthy pink salmon color, farmers use pellets that come loaded with pink dye, and use a "Salmo-fan" or "Salmo-ruler" -- a paint fan for choosing the desired color of salmon flesh. Farmed salmon are up to 10 times higher in pesticides like PCBs as wild salmon.

PESTICIDES:
The average American is exposed to 10 to 13 different pesticides through food, beverages and drinking water every day. And nine of the 10 most common pesticides are endocrine-disrupting, which have been linked to weight gain. While pesticides chemicals have a number of different effects on our bodies, one of the scariest is that they mimic estrogen; it's like giving us a shot of female hormones, which undermines our ability to build lean muscle and promotes fat storage.

But according to a recent study in the journal Environmental Health Perspectives, eating the right fruits and vegetables and avoiding the most contaminated ones, for just five days can reduce circulating pesticide based obesogens to undetectable or near undetectable levels.

LOOKING AT FRUIT:
An apple a day may keep the doctor away, but not if that apple contains high levels of pesticides and obesogens. The most dangerous fruits are apple, pears, peaches, imported grapes and strawberries. We urge you to buy organic when buying those fruits. Oranges, grapefruit, kiwi, bananas, pineapple, mango, and watermelon are safe for conventional diets.

For more information about the New American Diet, click here.