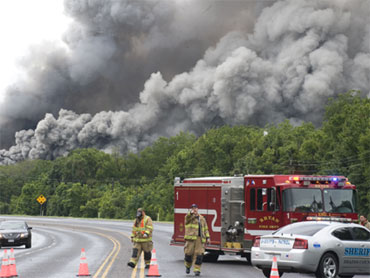 Thousands of residents were evacuated and the Texas A&M University campus closed Thursday as a fire burned at a chemical plant that processes explosive ammonium nitrate.

Black smoke settled over Bryan, a city of about 80,000 people about 100 miles north of Houston, after the fire started about noon at the nearby El Dorado Chemical Co., said fire dispatcher Andy Throne. The plant blends and packages fertilizer and other chemicals, including ammonium nitrate, a chemical used to make explosives.

No explosions had been reported as of Thursday evening.

The plume of smoke extended more than 60 miles from the plant and Texas Commission on Environmental Quality officials were en route to conduct air monitoring, said spokeswoman Andrea Murrow.

Radio warnings urged residents to avoid the smoke. Throne said the evacuation was considered mandatory but no one was being forced from their homes.

Evacuees were being taken in at A&M's air-conditioned Reed Arena, used as a shelter during hurricanes Katrina and Rita - and a middle school and high school in College Station, which is about seven miles south of Bryan. A&M's Pearce Pavilion was being reserved for pets.

Texas A&M spokesman Lane Stephenson said offices and classes were closed as a precaution, but he anticipated classes resuming Friday.

The fire department was expected to let the fire burn itself out due to the chemicals involved.

El Dorado Chemical's Web site describes the facility as a place where customers can stock up on ammonium nitrate fertilizer "by the truckloads" 24 hours a day.