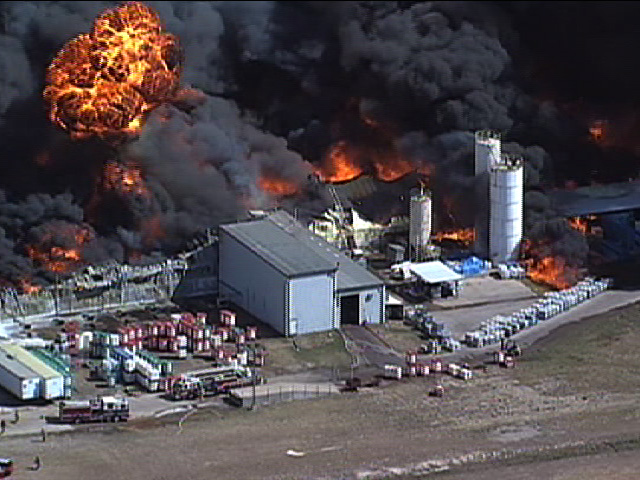 WAXAHACHIE, Texas - A fire sparked as workers mixed chemicals at a plant south of Dallas shot massive plumes of black smoke and bright orange flames into the sky Monday, forcing schoolchildren and residents to evacuate or take cover indoors to avoid possible exposure to dangerous gases.

Flames engulfed a large complex at a Magnablend, Inc., facility in Waxahachie. The fast-moving blaze overwhelmed a sprinkler system and consumed a fire truck, but no injuries were reported from the fire or resulting smoke.

Waxahachie Fire Chief David Hudgins said it wasn't immediately clear what chemicals were involved in sparking the fire, but crews expected to quell the flames by late afternoon and allow about 1,000 evacuated residents to return to their homes in the city 30 miles south of Dallas.

"It's the building that's burning, and there's chemicals inside, multiple kinds of chemicals," Waxahachie Fire Department spokeswoman Amy Hollywood. "Saying which kind would be speculative."

According to the company website, Magnablend houses ammonia and other chemicals for industries ranging from oil fields to industrial cleaning, at the facility located just off of Highway 287 near Interstate-35E.

Magnablend Environmental Health and Safety Manager Donald Golden said the fire spread very rapidly. "Fire departments were on the scene pretty quickly, but it [the blaze] just seemed to take off and accelerate pretty quickly," he told KTVT.

Nicolas Brescia of the U.S. Environmental Protection Agency said air quality readings in the city of about 25,000 did not require further action but that officials would continue monitoring to ensure hazardous materials did not spread outside the plant.

Magnablend spokesman Donald Golden told WFAA-TV that 25 to 30 employees who were inside the plant's 100,000-square-foot warehouse evacuated safely when the fire broke out before 11 a.m. Golden said the company manufactures about 200 products, including some that are hazardous when ignited.

Although fire departments from multiple cities have been called in to combat the blaze, so far the fames and fumes are so intense that fire crews have decided to let the fire burn itself out.

"All firefighters have been pulled back because of the severity of the situation," Hollywood said.

Authorities had ordered residents closest to the plant to evacuate, while others were advised to stay inside with doors and windows shut.

Jessenia Colin, an assistant general manager at a nearby Hampton Inn and Suites, said hotel staff members turned off air vents so smoke and chemicals didn't enter the rooms. As they waited for news and watched the smoke billow, staff covered their mouths to protect against the heavy chemical smell that hung in the air.

"It smells like a whole bunch of chemicals, like wrappers burning," Colin said. "It's making everyone's heads hurt."

Stephanie Otto said she was preparing her new restaurant for a Tuesday opening about a quarter-mile from the plant when she heard sirens and walked outside to see a "huge plume." She said she could hear what sounded like gun shots for about 15 minutes, and there was a strong smell of ammonia.

"It was huge," Otto said. "It looked like an atomic bomb went off."

Ellis County emergency management officials issued a mandatory evacuation order for an apartment complex, an elementary school and a junior college. Sheriff's officials urged residents not to drive toward the area of the fire. Parts of Highway 287 have been shut down.

Magnablend, Inc., manufactures, blends and packages chemicals. Much of its business revolves around energy production, including chemicals used to stimulate oil and gas wells and hydraulic fracturing. The company was launched in Waxahachie in 1979 and now employs about 250 people, with operations in Pennsylvania, Wyoming and North Dakota as well as Texas.

Texas Commission on Environmental Quality spokeswoman Lisa Wheeler said Magnablend has been in compliance with its state permits. A search of public documents revealed no significant violations for the company.