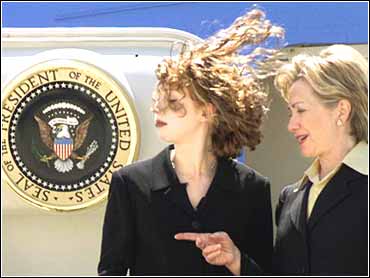 She plans to skip the start of the school year at Stanford University this fall so she can help her mom in her bid for New York's Senate seat.

A spokeswoman for the first lady says Chelsea also wants to spend more time with her father as he closes out his two terms in office.

The 20-year-old is due to begin her senior year at Stanford. She plans to return to the Palo Alto, California, campus at midyear, after the election is over.

She has accumulated additional credits at Stanford, and is still on track to graduate in the spring of 2001.

Although she has appeared alongside both her parents at political events and official functions, Chelsea Clinton has lived a mostly private life through her fathers presidency.

But Chelsea Clinton has maintained a higher profile as she has matured, often traveling with her father on foreign trips and acting as hostess at a few White House events this year while her
mother was away campaigning.

Chelsea Clinton accompanied her father to the Camp David peace talks that ended inconclusively this week, and to the Group of Eight economic meeting in Okinawa, Japan, last weekend.

Clinton said last month that his daughter has volunteered to represent the first family at the 2000 Olympic Games this September in Sydney, Australia.