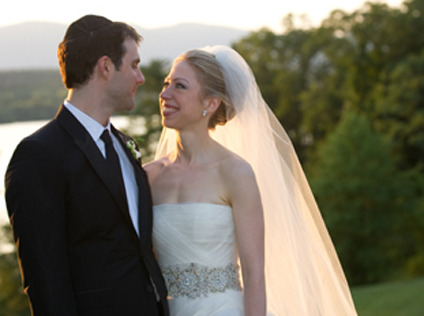 NEW YORK (CBS/AP) As her first official wedding photos reveal, Chelsea Clinton was a glowing bride when she said "I Do" to longtime beau Marc Mezinsky.

Strategically hidden from the public eye, the former first daughter, 30, married Mezinsky, 32, in a lavish ceremony at Astor Courts in Rhinebeck, N.Y., Saturday, in front of some 400 guests of their friends and family members.

Clinton walked down the aisle in a strapless Vera Wang (who was also in attendance) gown with an embellished waistline.

The ceremony was conducted by a rabbi and a reverend as Clinton is Methodist and Mezvinsky is Jewish.

Shortly after the ceremony, Mr. Clinton and Hillary Rodham Clinton released a statement.


"Today, we watched with great pride and overwhelming emotion as Chelsea and Marc wed in a beautiful ceremony at Astor Courts, surrounded by family and their close friends. We could not have asked for a more perfect day to celebrate the beginning of their life together, and we are so happy to welcome Marc into our family. On behalf of the newlyweds, we want to give special thanks to the people of Rhinebeck for welcoming us and to everyone for their well-wishes on this special day."